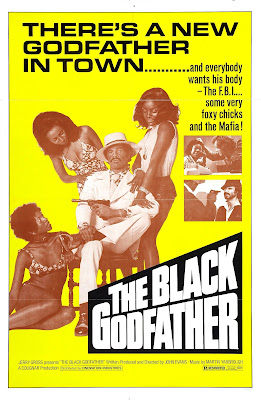 The Black Godfather is a pretty standard run of the mill Blaxploitation flick. In fact it is pretty much a ripoff of Black Ceasar with the oh so familiar tale of a black man trying to make it to the top and gain complete control over his community. 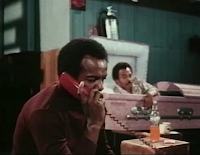 "Community" seems to be the word of the movie. Black Dynamite  even poked fun at this "But Black Dynamite, I sell drugs in this community" because every five seconds somebody in The Black Godfather is saying "We need to keep drugs out of the community".

Aside from the "Community" reference in Black Dynamite it is very possible that the far superior Dolemite borrowed from this movie with a black militant who sleeps in a coffin but unfortunately we do not get a bad-ass motha-fucka like Rudy Ray Moore. What we do get is a old timer named Nate Williams who has been running the show in the "black community" for a very long time. Nate is a pimp, a pusher, and a dangerous man but even he feels the pressure of "the man" that is a white mobster named Tony. Nate Williams takes a youngster under his wing named J.J. and gives him some work but its not long before J.J. wants to step up to being The Black Godfather. J.J. declares war against Tony and forms a militant group with a promise to keep drugs out of... you guessed it... The community. Of course J.J. doesn't care about drugs on the street but this is the only way to gain the respect of his followers. All he really wants is to keep the white man out of his neighborhood. Tony and his boys kill Nate Williams and kidnap J.J.'s girl. This all comes together with a big shoot-out in a hospital. Sounds like Black Cesar again, doesn't it?

The Black Godfather does have some bare breasted women running about but I'm not so sure if it is appreciated. We have a cross eyed junkie played by Betsee Finlee who can also be seen in the nude in Double Exposure which possibly sports the ugliest women in cinematic history. Some of the other treats that The Black Godfather has to offer is visible boom mics. An airplane crash and burn, car chase (complete with crash and burn), gun violence, kung fu bitches and a meat cleaver is buried into an achy-breaky skull. We also have plenty of skid row junkies roaming about looking for a fix and white people are refered to as "Cockroaches". The Black Godfather has little to no social commentary but I suppose there is some sort of anti drug message in there.

If you like any sort of polish on your blaxploitation films you are probably wasting your time. The Black Godfather is not a bad time waster for genre fans but all others should probably stay away and stick to something with a bit more production value like The Mack or just go in the opposite, over the top direction and re watch Dolemite. 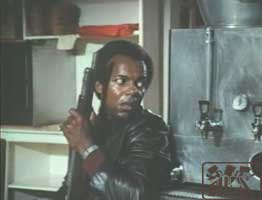