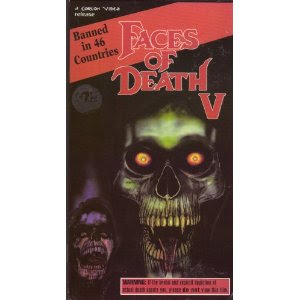 If you are familiar with the Faces Of Death series and have seen FOD 1 through 4 there is absolutely no reason to watch this one. FOD V is no more then a badly put together compilation of the four films. The narration is constantly changing and it doesn't match or flow properly.

The Faces Of Death crew have done this before when they released The Worst Of Faces Of Death which was a composit of 1-3. Its as if someone said Hey, I know. Why don't we just keep making shitty tapes of previous footage so we never have to shoot anything again and we can still get a check.

FOD 5 has the infamous monkey brains scene and the electric chair execution from the original FOD. It takes a lot of the slaughter house footage from Faces Of Death II. We get to see the deadly rattle snake bite again from FOD 3 but most of the footage is taken from Faces Of Death IV. The mental hospital murder, the giant radioactive leech, the Satanic decapitations and the mutilated puppy will pop up again. This makes me never want to see part 6 which I believe is just another mix and match pile of shit.