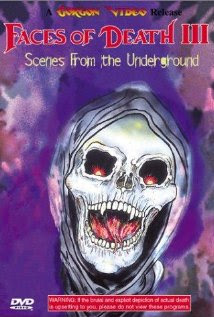 Well these Faces Of Death movies just get worse and worse don't they? The first film is good mondo fun. Faces Of Death part 2 was even more disturbing with nastier and more gruesome death on display. This one is just a straight up piece of shit with almost every single scene in the movie being a badly done reenactment of real scenarios involving death.

Dr. Francis B. Gross takes us through yet another look at death but the stylish elements from the first film are completely absent this time around. Director John Alan Schwartz has a cameo in F.O.D. 3. He plays a serial rapist and murderer on trial for video taping the sexual abuse and killing of a young Asian woman. By this time the series has become redundant and even the narration is totally repetitive. If I keep "exploring the many Faces Of Death" it is going to be the death of me.

With nothing new to offer F.O.D. 3 gives reenactments of suicide, deadly rattle snake bites, a skid row serial killer who dumps the lifeless bums bodies in dumpsters and some violent p.c.p. addicts. It seems the only real footage here is animal murder and if that is your thing you might as well join some dumb animals rights group and watch Kentucky Fried Chicken videos all day.

I'm pretty sure F.O.D. stands for fuck off and die.. 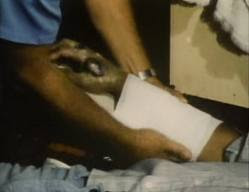