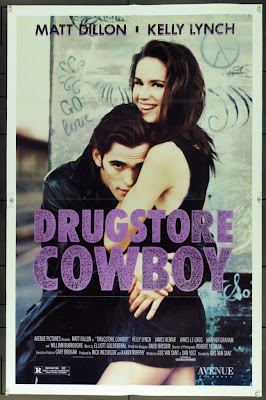 Remember when Matt Dillon was cool? In movies like Rumble Fish and Over The Edge? Well I guess there comes a time where you get to old to keep up the bad-ass juvenile delinquent act but its a shame when such a cool actor moves on to do Hollywood crap like Crash (2004). Drugstore Cowboy is the last of Dillon's more cutting edge stuff and I'm sure its safe to say that it is his last cult film.

Directed by Gus Van Sant, Drugstore Cowboy follows a gang of four junkies lead by Bob (Dillon) and his girlfriend Dianne (Kelly Lynch) who get their fix by breaking into drug stores and stealing the pills.

Gus Van Sant artistically depicts the life of the criminal junkie in a comedic manner. To take such a dark subject matter and make it funny is quite the task. Throw in the artsy-fartsy stuff and you are left with a classic in drugsploitation.

Bob is loser who has been in and out of jail most of his life. As he gets older the life style of being a drug addict is getting harder. Not only is it getting hard to find a new place to rob but the police are hot on his tail. He decides to take his gang of junkies on the road, across country to what will be be a life changing experience for him. Bob believes a hex is placed on him and his crew when one of his followers puts a hat on a bed. This is never explained in a way that makes any sense but Bob has some wacky ideas about luck. Well the hat on the bed turns out to be a bad omen after all and the result is an over dose of one of his friends. Stuck in a hotel room with a corpse Bob has to make some serious decisions on what to do. A cop gets shot, Bob is beaten bloody and his childhood sweet heart turns out to not not be as faithful as Bob thought.

Perhaps the drugs will not help Bob escape this one. His whole world is turned upside down and it is time for Bob to make a change but even as he tries to straighten out it seems the world is against him... or is it just the hex from the hat on the bed?

William S. Burroughs shows up as a junkie-priest and offers up some awesome Burroughs type dialogue. The movie also sports an okay soundtrack and when its all said and done Drugstore Cowboy makes for a good time with plenty of replay value. I think the main audience for this movie is people who like more modern type junkie films like Trainspotting but there is also a Rivers Edge type of feel that runs through out. There is also something a bit artistic about it. Whether it is the cinematography, the plot or the social messages that are thrown into it. Drugstore Cowboy is not your average time waster. It is more of a conversation starter that is filled with humor.