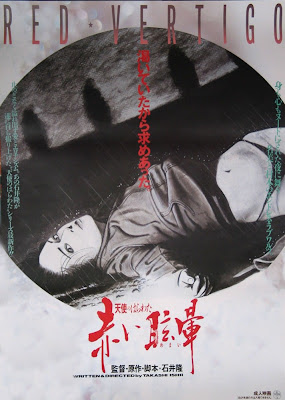 Angel Guts 5 on the other hand is rather tame and even a bit boring. From what I have read about the series, the only ones worth watching are the first three films.

This one has the audacity to call itself Red Vertigo but be forewarned, this aint no Alfred Hitchcock remake. There is barely a plot here at all and to top it all off the movie is not even shocking. Instead it aims for some sexy stuff in the earlier part of the film but they mess that up with all the violent rape stuff and then it just becomes a boring love story.

For those of you who have never heard of the Angel Guts series, it is another series of trashy Pinku films taken from Manga. The films are not really connected in any way other then the fact that the main character is always named Nami and that they all deal with rape and violent sex. Well Angel Guts : Red Vertigo couldn't even seem to get that right considering there is really only attempted rape scenes in this one.

The plot if you can call it that follows Nami a nurse who is having a really bad day. First her patients at the hospital try to rape but she fights them off and runs home only to find her scumbag boyfriend in bed with another woman. Nami takes off running again but is hit by a car and knocked unconscious. The man who hit her is in a bit of trouble of his own. His wife walked out on him and the Yakuza is after him for money that he has not payed up. However it is a little hard to feel bad for this prick considering that after he hits Nami with his car he decides to tie her up rape her.

Oops! I said rape again. I meant to say he attempts to rape her because once again Nami fights her attacker off. After she kicks this losers ass a bit he spends what seems like ages trying to apologize to her. Naturally Nami and the hit and rape driver fall in love and we get sex scenes and shower scenes and more sex scenes.

Yes it is all pretty dumb and pointless and its really just an excuse to show some bare breasted women but the end really takes the cake. I won't give the ending away in case if anybody out there possibly gives a shit about this movie but the ending comes completely out of left field and makes the whole movie seem even more pointless then it already was and that is quite an accomplishment.

In 1981 Abel Ferrara did the classic rape/revenge flick Ms. 45 which had a similar plot. The only difference here is that Ferrara didn't cop out on the rape scenes and did what any respectful director would have done and gave us a great revenge flick filled with murder but if you would rather see the rape victim fall in love with the bad guy then maybe this one is for you. Otherwise avoid Angel Guts 5 and check out Nami. Its a sick one. 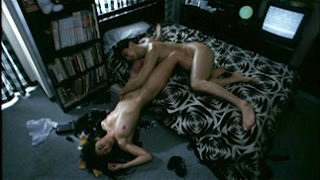