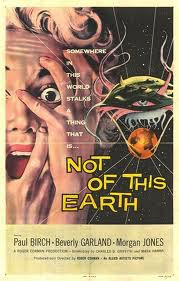 Well this is not a very good one. Produced and directed by Roger Corman the same year he would do Attack Of The Crab Monsters and this one pales in comparison. 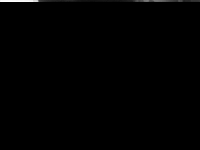 This one tells of a ping pong ball-eyed alien who is Not Of This Earth. The bug-eyed alien is not here for pleasure. It is strictly business. He needs blood to supply his dying planet and replenish his own life form back to health.

Its a unique plot but it is paced horribly. It drags on and on and can become a real downer and this even harder to believe considering its only just over an hour long. While the villain is wide eyed and full of life I fear that I was beginning to drool on myself.

The cameo king Dick Miller shows up here for a bit of screen time and gets killed off pretty quick. As you can see Dick is sharp as a tack in this flick. Dressed in a black shirt and white tie, Miller plays an obnoxious door to door salesmen who happens to knock on the wrong door.

Our alien who mainly hides his big eyes behind glasses takes handsome Dick down to the basement and strangles the life out of him. I couldn't help but think that the alien in his glasses and Dick Miller in his new wave tie look like they should be in another Roger Corman flick. Perhaps a rock & roll movie.

Not Of This Earth also offers up typically shitty looking monster that flies around and sucks the life from its victims. The monster looks more like a 50's style lampshade then anything else and all of these killer lampshade moments are the only entertaining moments in the whole damn movie. Unfortunately there isn't very much of this. The majority of the film shows our sun glass wearing alien just roaming about and being awkward. 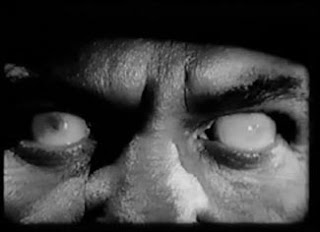 Email ThisBlogThis!Share to TwitterShare to FacebookShare to Pinterest
Labels: Monster Movies, Not Of This Earth