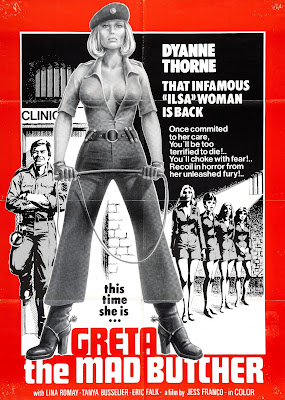 What happens when sleaze master Jesus Franco feels the influence of Ilsa : She Wolf Of The S.S.? He makes his own version of course. Originally titled Greta : Wicked Warden and then Wanda The Wicked Warden Dyanne Thorne plays... Well the Wicked Warden in another demented women in prison flick.

Abbie although innocent fakes her nymphomania in order to be checked into the female prison run by Greta (Dyanne Thorne). Abbie's sister was checked into the prison over a year ago and was never released. Desperate to learn her sisters fate Abbie is subjected to torture and sexual abuse from Greta and the other female inmates.

Amongst the female prisoners is Lina Romay (Female Vampire) and she offers up some expected trashy moments. She has a S&M lesbian scene with Dyanne Thorne in which sewing needles are stuck into her bare breasts but perhaps the sickest moment in the film shows Romay on the toilet taking a steamy dump. She forces Abbie to lick her boots while she sits on the john. Next she has Abbie lick her ass clean. Yuck! This is of course followed by vomit. Then of course we get the shower scenes and the occasional naked cat fight but this one doesn't shy off on the whips and shock therapy. Women are treated pretty badly in this place and it is all being recorded live from the prison and sold to some sick fuck who pays handsomely for some nice snuff flicks. One girl has her eye ripped out and the others are covered in scars. I have to admit the makeup looks pretty good on some of these girls. One of the girls has a nasty scar running down her eye and it looks pretty damn real. Growing up in New York I am oh so familiar with the marks that are left on a face after it is slashed up and I can't help but wonder if this particular girl is in fact scared in real life. Ilsa : The Wicked Warden also offers up a very nasty rape orgy. When some male inmates from another prison are invited over to the women's prison for a bit of love making which will all be filmed for financial purposes, the dudes rip at the clothes of the women and their flesh as well. The clothes drop and the blood drips and Franco shows it all.

As with most of these women in prison flicks there is a bit of revolution and revenge at the end of the film but of course it doesn't equal the brutality that the victims of this prison had to endure. Ilsa, Greta, Wanda... What ever you want to call it, makes for high entertainment in true trashy Franco fashion. This one even offers up footage of tigers and lions ripping away at flesh during a human cannibal scene. Check it out for some disgusting fun with Dyanne Thorne and Lina Romay. Thanks Jess Franco, ya sick fucker!