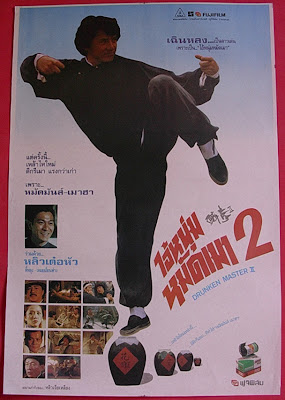 Everything that was great about Drunken Master is pretty much thrown out with the bath water in this shitty follow up. In reality Drunken Master II is not even really a sequel. It's more like a remake or just another look at Wong Fei-Hung and completely separate from the 70's classic.

This one plays more like a cross between Bruce Lee's The Big Boss and Drunken Master. A group of bully-boy fascists take over a workers plant and force the blue collar men to put in more hours with no benefit. When the people try to revolt they are whipped into shape with some Kung-Fu-ery by the bastards in charge. Wong Fei-Hung (Jackie Chan) has his own run in with these bad dudes when he gains hold of an ancient Chinese artifact that they want.

Now it is time for Wong Fei-Hung to get to drinking and fighting even though his pacifist father does not allow either one. Well Wong defies his father and goes to war with the scum and we get plenty of drunken fighting.

The main problem with this 90's flick is that they went over board with the comedy. Where the original Drunken Master was very slap-sticky, this one is just dumb, obnoxious and even a bit embracing to watch at times.

They try to make up for this here and there with double fisted drinking, vomiting and a few cool fight scenes but still nothing that really stands out on this one. Skip it and watch the original again. 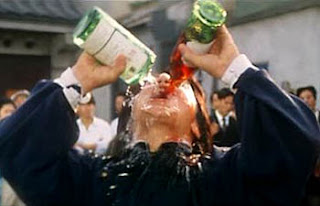