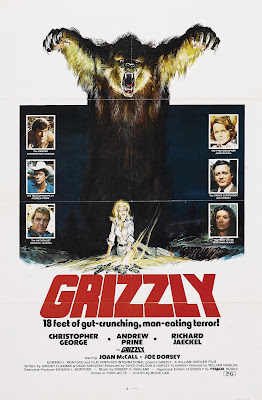 The most successful of all William Girdler films and it is understandable. Personally being a huge Girdler fan and a lover of his work that some consider unwatchable such as 3 On A Meathook and Asylum Of Satan, Grizzly is by far his most polished film and really goes to prove what the director was capable of.

Grizzly is just awesome from start to finish. With scenes of great brutality and bloodshed.

Christopher George (Pieces, The Exterminator, City Of The Living Dead) plays Kelly. Yep that's right his name is Kelly but he ain't no bitch. Kelly is a park ranger with a serious problem on his hands. When two pretty young girls turn up ripped to shreds he believes it to be a 15 foot Grizzly Bear which is not native to the woods that he is in control of. Kelly rounds up his men and take to the forest in search of the killer bear but he is always a step behind.

The bodies keep piling up and the Grizzly leaves a trail of body parts in his wake. Arms are severed, Heads are sent rolling, a woman is smashed into trees and left a mangled corpse, a bathing beauty meets her fate by the claws of the bear, a man is attacked from on top of a watch tower, another meets his fate by a killer bare hug and in the best and most controversial scene a little boy has his leg torn off at the knee, leaving a bloody stump for us to gawk at.  These are just some of the highlights that Grizzly has to offer but there is even more bloodletting that I haven't mentioned. The film also offers up explosions, helicopters and a real life giant Grizzly Bear which is unheard of for a Girdler film. In the films climax Kelly meets with the bear face to face and the battle has to be seen to be believed. 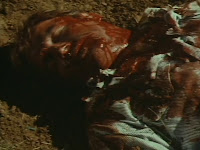 In the following year William Girdler will direct another nature gone wrong flick called Day Of The Animals also known as Something Is Out There but it just doesn't compare to the epic blood-bath that is Grizzly. Still true Girdler fans can't pass it up!

Grizzly caught a lot of flack from reviewers and critics upon its release. Most called it a Jaws ripoff. Some were witty enough to coin it as "Jaws With Claws" but this is of course a bit ridiculous. Yes there are similarities between the two films but did anybody accuse Steven Spielberg of ripping off Alfred Hitchcock's The Birds? Or Frogs or any of the other countless killer animals movies that came first. Of course not. Ripoff or not, I will take Grizzly any day over Jaws. Its the slasher flick of all killer animals movies and the only reason critics were so harsh on it is because the it came out right after the release of the giant budgeted Jaws. 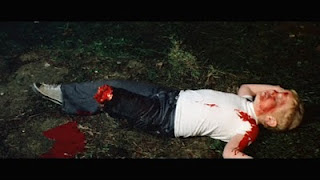