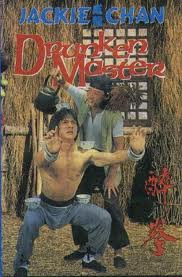 Drunken Master is one of my all time favorite Kung Fu flicks. This timeless cult classic blends slap stick comedy and drunken martial arts perfectly and makes for a fun watch every time. 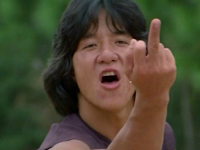 Jackie Chan plays Wong Fei-Hung a foul mouthed juvenile delinquent who likes to beat up his teacher, make out with his cousin and run amok in the streets with his fellow delinquent friends. He even goes as far as to steal from local restaurants. When his father fails to discipline young Wong he sends him to a legendary martial artist named Su Hai which is pronounced "So High". Su Hai has a reputation for being the most brutal of teachers and a brutal martial artist at the same time. Su Hai most certainly is "So High". He drinks like a fish and is always intoxicated. Su Hai teaches his new juvenile delinquent student the ways of The Drunken Master. As Wong studies the "8 drunken gods" he becomes unbeatable and of course a staggering drunk.

Of course the gratuitous drinking and Kung Fu is the main point of interest here but it also helps that the English dubbing is so dirty. "Go clean piss and crud-holes, you shit head" The language is  comical and offensive and the acting is pretty bad, as is expected from almost any Hong Kong Kung Fu movie. We also get a typical over the top training scene that seems to go on for a bit to long. Jackie Chan takes on punishment in the form of cracking walnuts between his fingers, balancing cups of boiling water on his arms, legs and head and endures many other forms of torture before he becomes a Drunken Master himself. Next he goes to war with Thunderleg, an assassin who is payed to kill his father.

Aside from the bad language, drinking and gratuitous training scenes, Drunken Master offers up a bald lunatic who fights his battles with his head alone, Jackie Chan smashes the mans skull in with a steel hammer, we also get to see Chan rub his ass on an opponents face, some really gross eating habits and an awesome final fight scene. The only thing that could have made The Drunken Master any better would have been a bit more blood.

So gather up your alcoholic friends, get a jug of cheap wine and laugh your way through Drunken Master.