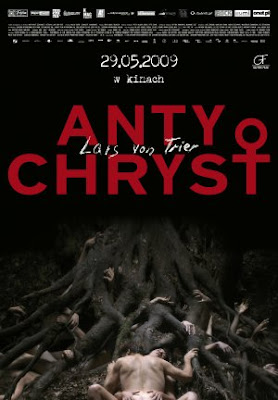 Antichrist is visually stimulating with very artistic and stylized cinematography but it doesn't paint a pretty picture. Perhaps the only moment of happiness is within the first five minutes of the film and then it quickly shifts gears into a very sad and dark place. The film opens up with a husband (Willem Dafoe) and a wife (Charlotte Gainsbourg) making love. The sex scene is shot in black and white and at a rate of 1000 frames per second. In other words, its shot in extreme slow motion. This sequence shows hardcore penetration in a shower. As the water drops from the couples genitals in the shower, their baby boy is escaping from his crib in the next room.

The baby climbs up to a window, pushes it open and walks out onto the ledge. The snow falls down in slow motion and we cut back to the married couple which is now in the bedroom. During their sexcapades they knock over a glass of water and the water falls to the floor in slow motion. Can anyone guess what we will see fall next in slow-mo? If you guessed the baby, you would have guessed right. This is about the extent of happy moments that Antichrist has to offer. The baby falls to his death and we move forward in time to a grieving period for the husband and wife. The rest of the film will be filled with grief and despair.

Willem Dafoe's character deals with his mourning at a normal pace but his wife is suffering from what the doctors call an A-typical mourning. Willem Dafoe, being a therapist is not willing to except this and decides to treat the woman he loves most without drugs. Instead he journeys into her mind through psychology and what he finds is quite appalling.

While psychologically treating his wife Willem Dafoe's character learns that she developed an abnormal fear for nature while she was writing a thesis in a secluded set of woods known as Eden. The couple take off to Eden to free her of the fear that is mentally tearing her apart. While the husband is a rational thinking man the wife in the story is much more in the mind frame of supernatural. She says things like "Nature is Satan's church" and she believes that since a woman's body is run by nature and not necessarily concious thought that this must mean the nature of woman is evil. We soon learn that the thesis she was writing about was in fact on this very subject mater.

Antichrist will again shift gears into more physically violent territory rather then mentally. The couple will end up fighting for their life and there is some truly disturbing moments to come. We are haunted by visions of mutilated animals and death seems to be all around. A talking fox rips its own guts out and then informs us that "Chaos reigns". A doe runs around with a stillborn fetus that has never fallen completely from the mothers body. A bird is eaten by ants and shared by a giant black Raven. The married couple will also both suffer from horrible bodily harm. Both of them have their genitals mutilated in a ultra-ghastly scene and only one of them will make it out of this place alive.

Many critics have called Antichrist a misogynistic movie and I don't really agree with this. Sure the female character is completely crazy but the movie never portrays a message of hatred for women. I think if anything it would be more honest to call the film chauvinistic because it shows the male character as a logical thinking being. Or a more efficient machine but it never looks at womanhood as a monster. It simply tells the story of a woman who went bats-crazy.

Antichrist comes complete with so many levels of depth. Each one worthy of discussion and analyzing. There is no clear message that is spelled out for the audience. Its a dark piece of art that came from the mind of Lars Von Trier who was in a very dark place himself. He made the movie as a personal experiment to help himself through his state of anxiety and depression. His own monsters have definitely made its way into the final product.

Watch this one with your best girl but I dare you to sleep comfortably when its all over.