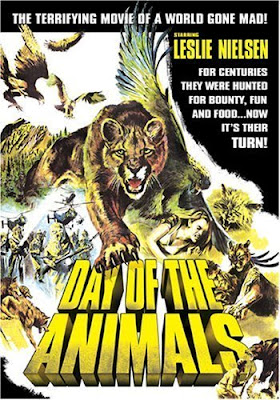 The great William Girdler would follow his highly successful nature gone wrong film Grizzly with another animals run amok flick called Day Of The Animals. Also known as Something Is Out There, Day Of The Animals is way inferior to Grizzly but still holds that campy William (Three On A Meathook) Girdler charm.

Day Of The Animals is often mistaken as a sequel to Grizzly but this of course is false. It was just an attempt for the director to try to cash in on his own success. To further confuse people Christopher George is again casted as the lead but this time he is leading a group of city-folk assholes on a nature hike through the mountains. Amongst the hikers is Lynda Day George who I remember best for another role she played besides Christopher George in a trashy little Spanish slasher called Pieces, where she would scream "Bastarrrrds" over and over and over again.

Andrew Stevens (Massacre At Central High) gets killed with a sharp stick through the guts and to make things even better  Leslie Nielsen plays a psychopathic scum bag on a power trip but we will get back to him later.

I have to laugh that people went to go see this thing, thinking it was a sequel to Grizzly. It is as far from a sequel as possible. This thing plays more like a remake of Frogs then another giant killer bear flick. Sure there is killer bears in the movie but that's because all of the animals have gone bats in this one. We have ridiculous scenes with rats being thrown at the faces of the actors. Snakes on fishing lines and many other very unbelievable animals attack scenes including a mountain cat that looks like it wants to cuddle rather then eat the actors on screen. Still this is all fun and those familiar with William Girdlers so-bad-its-good brand of art (Asylum Of Satan) shouldn't be disappointed.

Day Of The Animals is the classic tale of mother nature striking back against its biggest and most dangerous enemy, humanity. Despite constant warnings on the news that the animals have been acting kooky due to a damaged ozone, the city slicker yuppies venture up into the mountains where they will be terrorized by wolfs, dogs, bears, cats and birds. Remember in Frogs how the Frogs sort of seemed to be the ring leader? Well that's also going on here but instead of frogs it seems that the Hawks are sort of controlling it all from above.

Its possible that the poisonous ozone is not only affecting the animals because Leslie Nielsen's character although a total ass-hat from the start goes completely bonkers when he decides that there is no god above and that he will lead the group. I guess to Leslie Nielsen being in charge means running around with no shirt, screaming at people, beating up on old women and repeatedly calling her an old "Beverly Hills Bitch", smacking little "Cockroach" kids around, killing anyone who stands in his way and of course "Taking what he wants, when he wants" This of course meaning it is cool for him to rape the girls. Yep this one is before Nielsen would become the funny-man from Airplane and he does get a bit rape-happy in this one. For me all of the scenes with Leslie Nielsen are the most entertaining and gives Day Of The Animals a lot of its replay value. Nielsen's character of course meets a very nasty death. He is killed by a giant bear and hugged to death.

Warning : the video transfers of Day Of The Animals have all been pretty rough to my knowledge. Shriek Show put out two different versions of the movie on one disc. They offer up the theatrical print Something Is Out There which is very choppy, grainy and full of snap, crackles and pops. They also offer up the television transfer of Day Of The Animals which is by no means very good looking but still far clearer then the retro theatrical print. So if you can bare through the blurry images on the screen, some very bad acting and some what of a slow pace, you might find something that you like about this one but most would probably hate it. Probably only worth watching for William Girdler fans and anyone who just can't get enough of Nature Gone Wrong flicks. 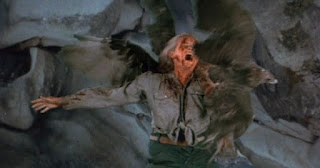 Email ThisBlogThis!Share to TwitterShare to FacebookShare to Pinterest
Labels: Day Of The Animals, Nature Gone Wrong, Something Is Out There