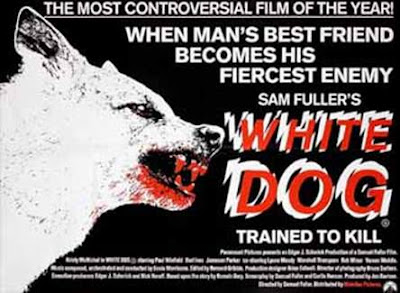 White Dog tells the gritty tale of a white German Shepard that is trained to attack and kill. However this is not your average attack dog. This is a "White Dog" meaning that it was bread by white racists to attack and kill black people.

While most directors would have taken this movie in one of two directions. Either the straight up exploitation rout or the sappy Hollywood moralist direction. The great Sam Fuller opts to make a art-house type horror film with a serious social commentary. The White Dog of course being a metaphor for the problems of racism in America and how easy it is to corrupt an innocent mind. The outcome is extremely dangerous. Not only is this dog dangerous but the subject matter is equally dangerous for any director to touch upon in 1982 and Fuller definitely paid the price.

The director fell victim to rabid critics who just didn't understand the film. Anyone familiar with Sam Fuller's work (The Naked Kiss, Shock Corridor) would blatantly see that racism and its affects on society is a theme that constantly comes back in the writer/directors films and this one is as touching as any other.

The horror on the other hand also works very well. When a struggling actress named Julie accidentally hits the dog with her car she does the humane thing and rushes the wounded animal to the hospital. She takes the dog home and falls in love with it. The first scene of violence shows the dog protecting its new owner against a rapist but its not long before innocent people start dying. Innocent black people that is. When Julie learns what is happening she takes her new pet to some professional animal trainers who have already dealt with a White Dog. The plan is to correct the dogs behaviour by mental reconditioning. The dog escapes and the murders continue but out of love for her dog Julie does not turn him in to the authorities.

White Dog artistically mixes horror and drama together. It finishes on a bit of a down note and comes complete with somewhat of a twist ending. There is also a delightful bit of gory mayhem that takes place in a church that needs to be seen to be believed. Check it out for a great Sam Fuller experience with racist animals, blood and a ending that would make Bambi viewers stop crying and shit their pants instead. 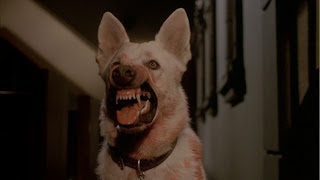