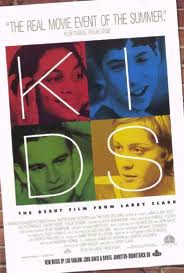 No other movie has ever depicted the directionless youth of the 90's better then this one. Kids is here as a permanent reminder of my own useless generation and I went to school with just about every character in this movie.

Kids follows a group of nihilistic urban street kids through the course of one day. The two main characters are Telly and Casper "The dopest ghost". Telly cares about one thing and one thing only and that is sex but he is not content with having sex with anyone. Telly has a fixation with young virgins. In the opening scene we see Telly taking the virginity of a very young teenage girl. In the films final moments Telly is yet again devirginizing another victim and I say victim because Telly is not the healthiest of people in the sexually transmitted disease department. "Virgins... I love em. No fucking diseases and no loose as a goose pussy". Telly's best friend Casper on the other hand is a bit more of a mess. He drinks excessively and there is barely a moment in the film where Casper does not have a 40 oz. drink in his hand. The drinking is of course between smoking pot, doing whip-its, stealing, fighting and even raping other teenage girls. This is all of course acceptable behaviour amongst the group of friends. After all they are only kids.

Written by 19 year old Harmony Korine who would go on to do the equally controversial Gummo, I can't really see Kids appealing to anybody who wasn't a teenager in the 90's or at least was not a street-kid. Kids does not paint a pretty picture. Depressing images of urban street decay, violence, junkies and weirdos are strung together to form a memorable, nihilistic piece of chaos. The fact that this movie was written by such a young person says one of two things. Either Harmony Korine was smart enough to try to make a statement on his own doomed generation or he was simply writing exactly what he saw on the streets and with his friends. I think the second is the most likely candidate which just further proves the mind frame of this generation. Nothing matters except getting high, screwing and skate boarding. Another interesting thing to look at in Kids is how irrelevant race is. The kids are black, white, brown and yellow and it doesn't mean a thing. Nothing matters as long as you are cool enough and lacking in moral fiber. This is just the way in New York. I'm sure it is different in more primitive parts of the U.S. but in New York the kids do not see in black and white. They just see through blured vision.

The whole movie is best summed up in the final scene when Casper wakes up naked on a couch surrounded by beer bottles and passed out friends sprawled across the floor in sweaty piles. "Jesus Christ... What happened?". Perhaps he is better off not remembering what happened. It was a long day filled with street violence, drug use, drinking and rape. Kids also offers up very young kids smoking marijuana and when I say young I mean probably 12 years old. It shows young kids having sex, there is a segment that teaches you how to role a blunt, there is a very violent beating in the street that shows about 20 kids on one. We get plenty of foul mouthed memorable quotes, a man with no legs on a skateboard and we are invited into the mind of the young people of the 90's.

Kids is a great movie that is not afraid to show Kids for the monsters that they are. After all they are only a product of their enviorment. They are old enough to know better but to young to care.