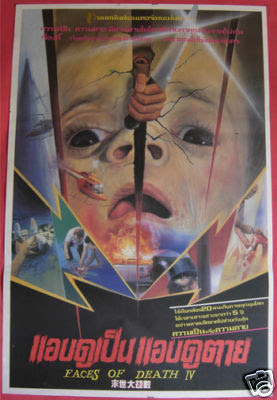 I been watching a lot of these Faces Of Death movies and pretty much shitting on them with the exception of the original in all of my reviews but I have to admit I kind of liked F.O.D. 4. It is just the same old rehash from previous F.O.D. movies and the reenactments is just as bad if not worse then Faces Of Death III but there were certain elements which give the 4th movie some replay value.

The first redeeming value that is noticed is probably the slick narration from the way over the top and as bad as they come actor James B. Schwartz who plays Dr. Louis Flellis who is supposed to be continuing the studies of death from Dr. Francis B. Gross who we all know and love from the first film. Well even if James B. Schwartz holds the record for worlds worst actor he is at least given good lines to read. Underground hip hop character Necro must have felt the genius of the narration within F.O.D. 4 because he uses a large amount of it on his Gory Days record for the song World Gone Mad. "We are living in a world gone mad. A crazy world. A world where death is a way of life. Every day we read of atrocities that numb our brain, but I believe to deny the insanity or flee from it is to submit to it and be at the mercy of it. One must study death in order to appreciate life. Come with me as we descend into a world gone mad." Pretty nifty huh? Necro would take more from the narration through out the film. Aside from the witty narration the reenactments are very unbalanced. While obviously fake due to camera angles and such some of the scenes are disturbingly graphic in a some what realistic manner while others are so ridiculous that you have to laugh. For instance the giant, radioactive leech which attaches itself to a swimming woman seems like it should have been in a 50's monster movie or something. What is this Attack Of The Giant Leeches or Faces Of Death? Then we get an incredibly fake scene where a Vietnamese family cuts up a puppy and cooks it up for some chow. A group of dumb drunken 80's morons run a girl over with a speedboat and take a little bit to much off the top of that mullet. Then there is a failed bungee rope stunt.  F.O.D. 4 sports an awesome scene near the very end. It doesn't look real by any sense of the world but I can see it being used in a Jim Van Bebber (Deadbeat At Dawn) movie or something. A group of Satanists are arrested and during the bust the FBI... and we know its the FBI because they are wearing blue jackets that say "FBI" on the back, find a mans severed head in a box which is supposed to be sent out to fellow Satanists. The FBI agents also find a snuff flick that the cultists made. They stick a knife in a mans face and the gore effects look like something out of a Lucio Fulci flick. Pretty bad-ass! The satanic climax makes F.O.D. 4 well worth the watch. I just wish they could have used some of these special effects in a real movie instead of a bad excuse for a mondo flick. Some of the other treats that F.O.D. 4 has to offer is a magician who has his achy-breaky skull smashed open in a magic trick gone wrong, a muscle-head who allows his friends to drive a pick-up truck over his mid torso, political war crimes and plenty more.

F.O.D. 4 also offers up some anti vegetarian nonsense as if the viewers are really concerned with the social politics of a Faces Of Death writer. Totally ridiculous! I knew sooner or later I would start laughing at these movies. 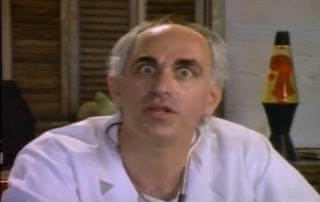