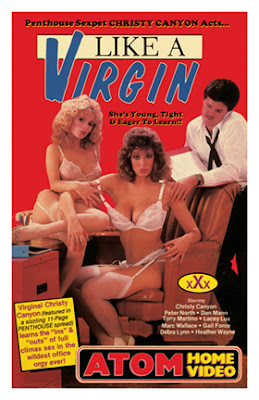 You would think with a title like Like A Virgin you would get a bunch of dumb new wave bitches with big teased out Madonna hair right? Well you don't. What you do get is Peter North as a white collar worker who's wife doesn't give him any ass. Well lucky for money-shot North, Christy Canyon is a new employee at his office building and this means he will be getting plenty of ass. Wait a minute, this is Christy Canyon we are talking about... I meant to say he will be getting plenty of tit.

This is about the extent of the plot here. There is about a total of two locations in the whole movie and the acting is awful with a capital A.