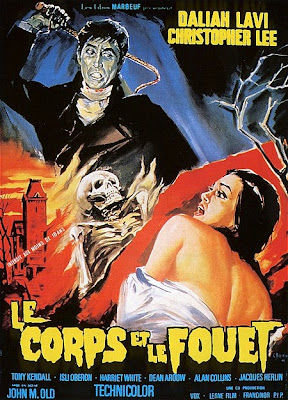 Released the same year as Bava's classic Black Sabbath. The Whip And The Body tells of Sadomasochism, insanity and ghosts.

Also known as What, The Whip And The Flesh, Son Of Satan, Night Is The Phantom and many more.

The story is morbid but it crawls along at a slow pace with lots of talky scenes. Bava's direction, cinematography and lighting are the saviour yet again. With out Bava's artistic sense of direction The Whip And The Body would have been unwatchable.

Christopher Lee plays a sadistic man named Kurt who has been exiled from his wealthy families castle. He returns to torment his family once more. The lead actress is played by Daliah Lavi who reminded me a lot of Barbara Steele (Black Sunday, Caged Heat). Lavi is arranged to marry Kurt's brother but deep down inside Lavi has a secret love for Kurt and S&M of course. At first look it seems there is about to be a violent rape scene with clothes being ripped off and a bit of slap-happy fun but when Kurt brings out the whip Lavi's facial expression changes from horrified to a look of ecstasy. "You haven't changed I see... You always loved violence" Soon after Kurt is mysteriously killed with a dagger through the throat. The other members are of the house are being killed off one by one as Lavi is visited by the ghost of Kurt for some romantic sex and violence.

The Whip And The Body doesn't offer up any naked flesh but does deliver stabbings, a burning corpse, creepy settings, creepy lighting, elegant camera work, a repetitive score and of course whips. Gialo fans should see the predictible ending from a mile away but its still worth a watch for all Mario Bava fans. Although it doesn't match up with movies like Blood And Black Lace which would come out the following year The Whip And The Body is another example of what  Bava can do with limited resources. 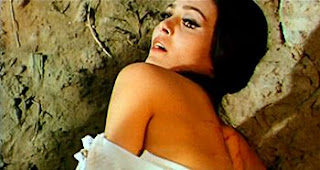 Email ThisBlogThis!Share to TwitterShare to FacebookShare to Pinterest
Labels: Giallo's, Hauntings And Ghosts, Son Of Satan, What., Whip And The Body, Whip ANd The Flesh