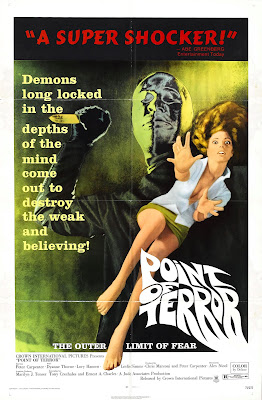 I wouldn't exactly call this early 70's flick a horror movie. It's more of a thriller then anything else. I suppose it has elements of a mystery as well but it really is just a thriller. Personally not being the biggest fan of thrillers it is no surprise that this film didn't have to much hold on me.

Point Of Terror tells the tale of a greedy nightclub singer who will do anything to become a star. He decides to manipulate an older woman named Andrea, played by Dyanne (Ilsa : She Wolf Of The S.S.) Thorne who is partial owner in her husbands big time record company. The tables are turned on our singer when we learn that Andrea is more manipulative and vindictive then he. Mix in some blackmail, jelousy and murder and a typically depressing 70's ending and you have Point Of Terror. 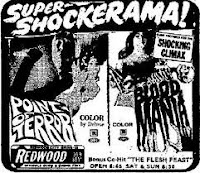 This thing comes from the sometimes good but most of the time awful Crown International and while watching for the first time I couldn't help but be reminded of Blood Mania which makes sense because it has many of the same cast and crew members. Where it was most obvious was in the cinematography and lighting departments but even the pace and tone were very similar. Since I am perhaps the worlds only fan of Blood Mania, I sort of had high hopes for this one but was sadly let down with the films boring plot and awful song and dance routine from our main character. The music is as bad as can be and so is the wardrobe but there were still some elements that helped me get through this one in one sitting. The first of course being the Dyanne Thorne breasts on display. The second being the nice camera work and the oh so familiar Blood Mania style lighting. Point Of Terror also offers up some male nudity for all the ladies out there. We also get a scene in which a wheelchair bound man is drowned in a swimming pool, a gialo-esque stabbing, achy-breaky skulls (complete with a woman being thrown off a cliff, leaving a shattered skull on the rocks), gun wounds to the gut, excessive drinking and a scene in which Dyanne Thorn spreads em in a teasing up-skirt shot.

This one really isn't worth watching unless of course you are a die hard Thorne fan. I would recommend Blood Mania over this one any day.

Email ThisBlogThis!Share to TwitterShare to FacebookShare to Pinterest
Labels: Point Of Terror