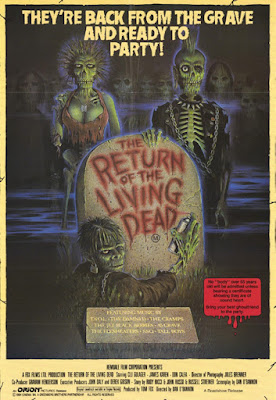 Return Of The Living Dead has become one of the largest cult films in the zombie film genre. The reason is probably because it appeals to multiple groups of people. Due to its punk rock soundtrack and bleak message which goes against structure, police and of course the military, Return Of The Living Dead has a large following of punk rockers but it also appeals to those who prefer silly 80's mayhem in their horror films and of course the zombie fanatics hold this one close to their hearts as well.

Being a young horror obsessed teenage punk rocker myself at one time I have seen this movie countless times on video but last night I saw it for the first time on the big screen with an audience. The seats were jam packed with punks and horror-freaks who knew just about every line to the movie. "What do you think this is a fucking costume? Its a way of life!" It played on a double bill with Re-Animator which came out the same year and is equally fun when it comes to 80's zombie cult flicks.

Dan O'Bannon's follow up to Night Of The Living Dead involves a bunch of young punk rockers who barricade themselves inside a mortuary while fighting off droves of brain-eating zombies. Yep, in this one the zombies are very picky eaters and are not content on eating human flesh. It is strictly a human brains diet and in one mind-numbing scene a naked female zombie who is missing the bottom half of her body explains why they eat brains. Return Of The Living Dead is more of a comedy then anything you can take seriously and they are not the slow staggering George A. Romero type of zombies. So if zombies that run fast and speak is against your zombie religion or something, you should probably stay away from this one all together. However if you want to see scream queen Linnea Quigley get naked and dance on a tombstone before having her brains munched on by a bunch of rotten zombies, then this one might be for you.

This fast paced zombie-fest sports a soundtrack with The Cramps, 45 Grave and many more. We have midget zombies, a pick axe to the brain, multiple decapitations, dismemberment, brain munching, split dogs, dead cops and some naked breasts. Its an all around good time. If you like your zombie films to be more serious then stay away from this one and stick with Romero's Dawn Of The Dead and Day Of The Dead.

Email ThisBlogThis!Share to TwitterShare to FacebookShare to Pinterest
Labels: Return Of The Living Dead, Zombie Flicks