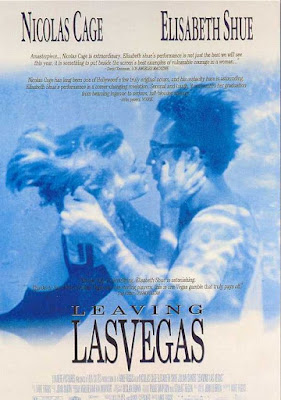 Sappy Hollywood love stories is usually not my bag but this one is a bit different. The nihilistic and downbeat vibe makes Leaving Las Vegas an interesting watch.

Nicolas Cage portrays a shattered man who heads to Las Vegas with plans of drinking himself to death. Literally! He bumps into a prostitute played by Elisabeth Shue who is equally damaged. Together the couple try their best to except one another for who they are and try to look past each others flaws. This is pretty hard to do when one has no desire to live outside a shabby relationship in Las Vegas. Nicolas Cage is great as the drunken lunatic he depicts. Aside from Barfly, I can not think of another film that showcases a helpless alcoholic in such an entertaining manner. Come to think of it Leaving Las Vegas and Barfly would probably make for a pretty good double feature.

We get plenty of drunken antics including falling thru glass tables, wake & shake withdrawals and just a whole slew of alchy ridiculousness. Elisabeth Shue does get topless for the cameras which is also not a bad thing and there are a few other naked ladies on display as well. This one sports some really twisted characters and when it is all said and done it is not your average romance flick. Sure you can enjoy this one with your best girl especially if you are into doomed Bonnie & Clyde type characters but I would imagine that Leaving Las Vegas would go best with people who like to drink. While this one might be a bit more dramatic then Barfly it still holds some of that comedic charm.