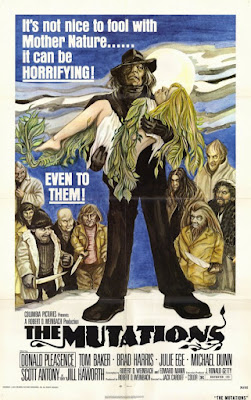 Originally this one was supposed to be called The Freakmaker which is the more suiting title but for some odd reason the producers felt it would work better as The Mutations. Not quite sure I agree with them. At any rate this one takes Tod Browning's Freaks and gives it the 70's treatment with violence and nudity amped up.

Freakmaker is a strange little exploitation flick. Its not necessarily strange just because of its odd subject matter or the fact that we will ogle human deformities and killer plants. Its odd because it was all done so well. We have beautiful lighting, very nice cinematography, excellent direction and big actors like Donald Pleasence. Granted Pleasence may not have been a super star at the time or anything but it is still strange to see such a professional approach at a film that most would probably consider a piece of trash. Due to its production value Freakmaker plays a bit like an art film masked as a exploitation movie. Leave it to the British!

Donald Pleasence plays a mad scientist who has discovered some new Mutations is carnivorous plants. He bribes the deformed ringleader of the local freak-show to abduct beautiful young girls as subjects in his new experiments. The demented scientist is turning the victims into a sort of half human half plant but as I mentioned these plants eat meat. Its not long before the giant plant monsters are roaming about and munching on the flesh of bums and street trash. This one comes complete with plenty of midgets including Michael Dunn who I remember best as the necrophiliac dwarf in Dr. Frankensteins Castle Of Freaks. We also have a deformed dwarf who calls himself the human pretzel. Lets just say his appendages move in all the wrong places. We have the alligator woman, a monkey woman, the bearded lady and even the human skeleton which is nothing more then an anorexic woman. Aside from the freaks there are also quite a few naked ladies on display in this one which is always nice and there is a touch of the red stuff for all the gore-hounds out there. However the real highlight of this movie is Popeye! Popeye is famous for his ability to pop his own eyes out of his skull. Yuck!

Certain scenes are directly lifted from Browning's Freaks and others seem to be completely unique. There are also elements of Eyes Without A Face (1960) to be found within and perhaps a touch of Day Of The Triffids.

While I wouldn't exactly say that The Freakmaker is a great example of cinema, it certainly is strange enough for the average exploitation fan. Check this one out for fun with drooling freaks, mad scientists and knife wielding dwarfs.