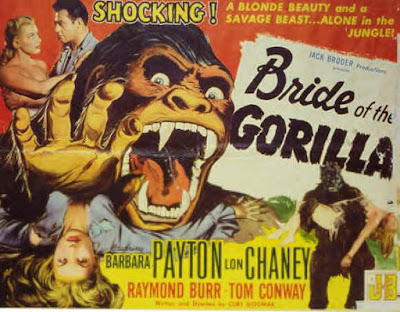 Bride Of The Gorilla is a hard movie to classify and place in a genre. I suppose you could try to lump it in with all those killer gorilla movies from the 30's but this one has very little gorilla suit action. It is almost more of a witch flick with voodoo and black magic. 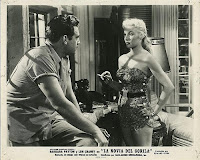 Dina is a sexy dancing blond who has grown tired of her elderly husband and life in the jungle. She wastes away her days dancing in her low cut leopard print outfits or flirting with her husbands workers. Barney in particular strikes her attention. When Dina's husband learns that Barney is making a move for his hot young wife he fires him but Barney convinces Dina to run off with him. Instead of leaving Barney sucker punches his old boss in the guts and leaves him for snake food in the jungle. About this time Lon (The Wolf Man) Chaney Jr. shows up as a cop who wants to convict Barney for murder but with lack of evidence he has no case to build. However it just so happens that an old witch witnessed Barney kill his boss but instead of turning him in to the police she places a voodoo curse on the murdering scum. 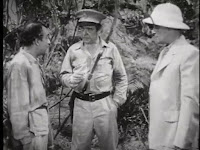 The curse turns Barney into a sort of wild beast by night who roams around in the jungle and kills animals. Its only a matter of time before the beast starts hunting humans as well. This thing is full of plot holes and it really doesn't make to much sense in the end. Barney appears normal to those around him but when he looks in a mirror or a lake he is gorilla. However natives of the jungle claim they have seen him in beast form terrorizing the jungle.

Bride Of The Gorilla may not be the best movie ever made but it runs just over an hour and still manages to be cheesily entertaining. From Lon Chaney Jr. to the bad gorilla suit it serves as nothing more then a time waster. Nothing overly memorable in here but you could do worse.

Email ThisBlogThis!Share to TwitterShare to FacebookShare to Pinterest
Labels: Bride Of The Gorilla, Face In The Water, Gorilla's, Witch Flicks And Evil Cults