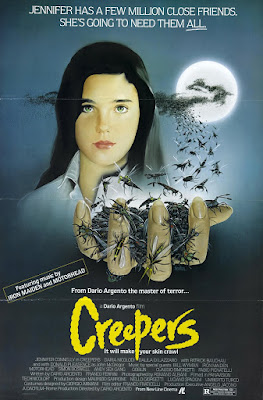 Phenomena is one of the most entertaining Dario Argento movies. It has everything a Argento fan could ask for, Gory murders, nice cinematography, a pretty good plot, a cool soundtrack, Donald Pleasence, a deformed killer child and of course a straight razor wielding chimp on a murderous rampage.

If that's not cool I don't know what is. A young Jennifer Connelly plays the insect loving lead in this unusual Giallo. Not only does she love insects but they love her too. The girl and the insects have a sort of telepathic connection and when she gets mixed up in the middle of a serial killers mystery the bugs come to her rescue and help her solve the crime. Unfortunately this comes at a high price for the young girl. She becomes the killers next target and again calls to her creepy crawly friends for help. What she actually endures is quite disturbing and has to be seen to be believed.

Its hard to decide who the best character is in this one because there are so many good ones but for me it has to be the pissed off killer chimp. Donald Pleasence plays a wheelchair bound cripple who spends most of his time with insects and his pet monkey. When he falls victim to the gloved serial killer the chimp goes bat-shit crazy and seeks revenge with a straight razor. Apparently this primate wasn't only mean on screen because during filming it bit Jennifer Connelly's finger off. It had to be sewn back on. Apparently the chimp was really nasty to her thru the entire filming. Perhaps the chimp was also telepathic and didn't like the fact that Connelly would be doing The Labyrinth with David Bowie in the following year.

Aside from the vicious chimp, Phenomena sports some violence with scissors, a spear is shoved thru a girls head, faces are shoved thru glass windows, throats are slit and in a very nasty scene a handcuffed cop must smash and mangle his own hand to get out of the cuffs in a brilliant and gory pre Saw scene. There is also plenty of maggot-fu in this one. In one of the films most disturbing scenes a girl falls into a maggot filled pit of rotten corpses. This scene makes me want to puke every time. Phenomena was also released in a heavily cut version known as Creepers. It can be found in many public domain boxsets or in the dollar bin at the local video store. However the cut version is so brutally butchered it isn't worth fifty cents. Seek this one out in its true, gory, uncut form. You wont regret it. Its a must see for anyone who digs gory Italian Giallo's.