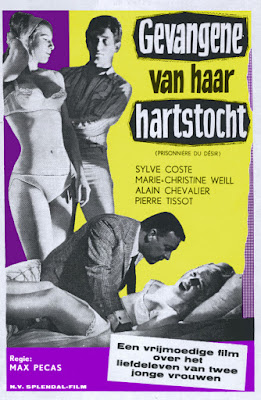 The Slave is a strange little sexploitation film from French director Max Pecas who is known for trashy titles such as A Sweet Taste Of Honey and House Of 1000 Pleasures. This one is no different when it comes to bare breasted ladies and raunchy characters but the plot is a real weird one.

A wealthy woman is planning on spending the next ten days with her gigolo boyfriend in her suburban home while her husband is away on business. Her plans a disrupted when her half brother shows up with his mistress. It turns out her half brother has just committed a robbery and needs to hide out in his sisters home. The only problem is big brother is a bit of a pervert and gets a bit rapey with his sister. Apparently he has been blackmailing his sister for the past nine years with some pornographic pictures he has of her, so calling the police is out of the question and the whole house becomes his slave and he does what he wants to all of them. While all this is going on some skin-headed mobster is plotting a revenge against the domineering criminal.

It all comes complete with a very strange twist ending with plenty of perversion and over the top violence. This has to be one of the weirdest sexploitation films ever made. While it isn't necessarily a very good movie it is how bizarre some of the scenes are that makes it a relatively interesting watch. In one of the weirdest moments a woman strips off her clothes and furiously humps a tree while she watches a man in a straightjacket being violently beaten. How cool is that?

This one plays like a cross between a crime film and a roughie with a touch of the artsy-fartsy stuff. Its just weird!
Posted by Paul Awful at 2:47 PM

Email ThisBlogThis!Share to TwitterShare to FacebookShare to Pinterest
Labels: Sexploitation, Slave (The)