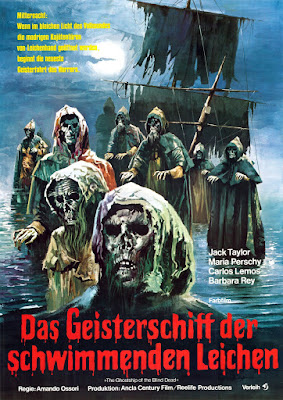 This one went under a whole slew of titles including Ghost Ship Of The Blind Dead, Ghost Galleon, Horror Of The Zombies and many more but to keep things simple I like to call it Blind Dead 3 which it also went under.

Personally I am a fan of The Blind Dead movies but this one is by far the worst of the bunch. This time around the skeletal, Templar-Zombies are aboard an old ghost-ship which is apparently "in a different dimension". Some bikini models are lured out of the fog and into the old-time galleon where the zombified Templars will feast on their flesh. Trust me, it sounds a lot better then it really is.

The main problem with this installment in the series is that there is way to much talky talk and not enough violence and gore. The whole thing tends to get a bit tiring with endless scenes of creeping around the old ship and constant chit chat.

Jesus Franco veteran Jack Taylor shows up in this one as the mastermind behind a publicity stunt that is supposed to bring the models wealth and fame but he seems to come off more like a crime-lord. The truth is that his character doesn't bring much to this film either. It all comes off pretty weird and confused and in the end it makes for a pretty forgettable experience. The only things worth noting in the film is a couple of bikini clad bimbos and of course the awesome looking zombies themselves. There is a bit of gore in a decapitation scene where we watch the Templar's munch on the flesh of a pretty blond girl but other then that even the zombies seem pretty confused. Wait... If these guys are hungry for human flesh why did they just throw that girls body overboard? Maybe they have some pals down there on the ocean floor like in Lucio Fulci's Zombi.

Ghost Galleon is only worth owning for those who want to complete their Blind Dead collection. It is offered on many public domain DVD packs for about a dollar and that is probably all it is worth.