Here's another great one from The Godfather Of Gore Herschell Gordon Lewis. This one comes in the form of a Bikersploitation film. Typical of an H.G. Lewis film She-Devils On Wheels is quite different from the average biker film. 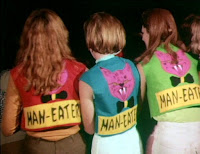 A all girl biker gang known as The Man-Eaters are concerned with two things. The first is riding their motorcycles and the second in men. "You treat men like a slab of meat". These chicks have one major rule. No boyfriends! Getting it on with as many men as possible is the key here but if you get hung up on a particular guy, you are dead meat! In one of the most memorable scenes a gang member does just that. They teach the girl a lesson by beating the tar out of lover-boy and force his girlfriend to drag his bloody body from the back of her chopper. As one would expect from Mr. Lewis this is shown in gory detail. The film also offers up a blood caked rape victim and a gory decapitation that comes complete with a head flying thru the air in slow motion.

With a plot like this one would think it would be an excuse for tons of naked female flesh and it would play more like a Sexploitation flick but oddly enough this is not the case. In fact the is absolutely no nudity in the entire film, not one bit of tit. You never know what you're going to get with a Herschell Gordon Lewis film except that its probably going to be crazy and done in total bad taste.

Unlike other biker flicks that pass themselves off as girl-gang movies like Hells Bells, Angels Wild Women and The Hellcats, She-Devils On Wheels actually casts real biker chicks and only one of them was an actor. So as one would expect the acting is totally ridiculous here but that is nothing new for a H.G. Lewis film. Another thing that makes this one so strange is the fact that these supposedly rough and tough street girls never use profanity. Instead they deliver absurd insults that a grandmother might use "why don't you fumigate yourself crap-head". However where these broads lack in the verbal abuse department they make up for it with violence. In very unbelievable gang fights we watch these chicks destroy gangs of men. They beat em with fists, boots and chains and win every time. Even the cops can't stop The Man-Eaters.

The original title for this movie was going to be Man-Eaters On Motorbikes but Lewis wisely changed it to the more exploitative title of She-Devils On Wheels. This thing comes complete with a bad-ass theme song called Get Off The Road which has been covered by multiple bands including The Cramps. If you dig crazy and violent biker films and you can stand the unintentional ridiculousness then this one is perfect. 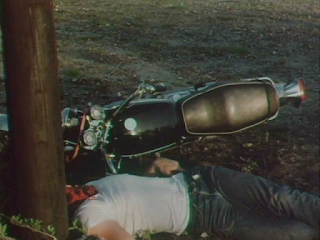