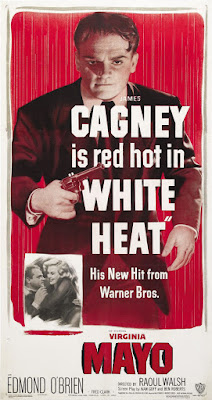 James Cagney plays the most vicious gangster of his career in White Heat. His name is Cody Jarrett and he is one mean dude. Cagney defines the definition of the antihero with this character. He is psychopathic, ruthless and probably insane but you can't help but love Cody Jarrett. 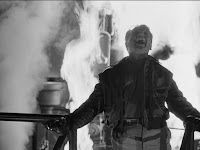 Cody and his mother are the masterminds behind the criminal organization. The rest of the gang takes orders from the mother and son and they all are quite aware that Cody trusts nobody in this world except his mother. Even his wife is subject to beatings and constant verbal abuse. If you question Cody or his mother you will get a Cagney sized fist across the chops but if you cross them you are a dead man walking. When the gangs latest heist goes wrong and the police are hot on their trail Cody flies to another state and confesses to a crime that he didn't do. Knowing the phoney crime will get him no more then two years in the pen, he will be getting off easy from the real crime that left four dead and a police officer wounded. 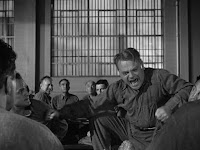 While Cody is serving his time a member of the gang makes a move for his wife. The new couple kill Cody's mother and make a deal with Cody's inmates. Cody is a walking target. His cheating wife and backstabbing partner are trying to see that he never makes it out of prison alive because if he does there will be hell to pay. Well Cody does get out and things end pretty badly for everyone.

With a plot like this and a star like Cagney how could this film fail? The thing that I am most surprised at is that White Heat ever got passed the censors board. Cody's revenge is violent and brutal. He fills fellow criminals and police officers full of bullet holes and at times has this sinister smile on his face. The character of Cody seems to be a complete sociopath with a total lack of empathy for anyone and anything that does not involve him or his mother. Something you are not used to seeing in a 1940's film. 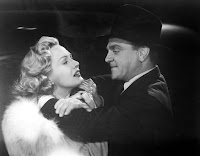 Cody's wife played by the beautiful Virginia Mayo is also a character with a lot of depth. She is drop dead gorgeous but she is rude and crude. Shes a bit of a slut and will also do anything to save her own skin. In the film she is actually the one to put the bullet in Mothers back. She spits, drinks and has little to manners. Of course she gets away with a lot of this because of how attractive she is but even her introduction goes to show that White Heat is going to break all of the rules. We first see her sleeping. Her pretty face is made up with tons of lipstick and eyeshadow but she is snoring like a slob. The camera pans down only to show us she is passed out in a robe. To my knowledge no movie has ever depicted such a beautiful woman in this way before White Heat. 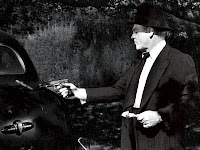 Part of the reason that White Heat brakes so many rules is due to James Cagney himself. He got his way when Warner Brothers Studios signed a contract saying that Cagney gets to chose all of his own roles and play his character the way he wanted to. He also had the right to rewrite the script if he wanted to. So much of the dark nihilistic tone in White Heat comes from Cagney in this one and it proved to be a huge hit. People were so please to see Cagney back on the big screen doing what he does best and that is of course depicting bad-ass gangsters. In one of my favorite scenes Cody kidnaps a enemy, puts him in the trunk and leaves him there over night. In the morning he grabs a chicken leg and his pistol, walks over to the car and fills the trunk full of bullet holes. Then he takes a bite of his chicken and gets on his way. He does all of this without blinking an eye. This just goes to show the kind of man Cody really is. On the other hand he had a complete and total dedication to his mother. Once his mother dies Cody sets out on a self destructive path of violence and bloodshed. It all comes complete with an amazing nihilistic ending that has to be seen.

Check this one out for some fun with wife-beating, police killing and prison fights. It comes complete with explosions, car chases, burn victims, witty dialogue and plenty of Cagney gun violence. "You wouldn't kill me in cold blood would ya Cody? No I'll let ya warm up a bit".