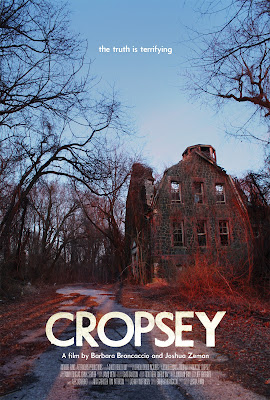 Around my parts in Long Island there is a right of passage that all teenagers must go thru to prove they are tough. It involves going to Kings Park abandoned insane asylum and exploring the creepy buildings. Apparently the teens of Staten Island have the same test of manhood. The only difference is that their abandoned loony-bin has a bad-ass urban legend behind it. That is the legend of Cropsey!

When I learned that the teenagers of Staten Island have a similar favorite pass time I was naturally interested. When I learned of the infamous serial killer "Cropsey" who dwells in the underground tunnels of the abandoned buildings and snatches young kiddies off of the streets to cut them up, I was even more intrigued.

When I hear the name Cropsey the first thing that comes to mind is the gory 80's Slasher film The Burning. Well just like the stalk & slash 80's classic Cropsey is a fictional character. He doesn't exist. However they say all legends have some truth behind it and I guess it has never been more evident then in this case. It just so happens that there was a homeless sadistic killer who lives on the grounds of the psyche buildings and kidnapped young children off of the streets and butchered them. His name is Andre Rand.

This documentary explores the abandoned loony-bins of Staten Island as well as the urban legend of Cropsey. It eventually leads us to Andre Rand and does its best to make sense out of what really went on. Andre Rand was a strange individual who prayed on the mentally retarded. Having an odd connection with the mentally disabled from his younger years when he worked as an orderly in the nut-house, he felt a strange compulsion to kill these children.

The documentary itself is a bit of a mess and like many of the murder victims there is never really any closure. At times it gets confusing and a bit hard to follow. The information is hard to process as the narrator jumps back and forth in year. I wouldn't necessarily say Cropsey is a bad movie but it certainly isn't very good either. The subject matter is interesting enough but the clumsy approach and anticlimactic ending left a bad taste in my mouth.

The film makers behind this thing would go on to do a much better documentary in 2014 called Killer Legends which looks at some of the world most grotesque urban legends and searches for the true events that may have inspired them. I would say skip Cropsey and take a look at the later film for a much more coherent and better made doc.