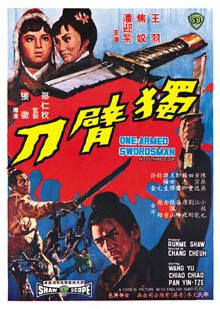 One-Armed Swordsman is a groundbreaking Kung Fu film released by the Shaw Brothers. Heavily influenced by the Japanese Samurai Films. It is also the first of all the cripple-kung-fu films. Due to its subject mater of a one-armed martial artist it was also the movie that made it okay to show blood & gore in Kung Fu films.

This one follows a young man with the really cool name of Fang Kang who's father was killed while protecting his teacher against a gang of kung-fuers. His father leaves Fang a sword which is broken in half and the grateful teacher takes the young boy under his wing and trains him in the ways of martial arts. Fang Kang isn't exactly excepted by his teachers disciples and in an argument gone wrong his fellow brothers and teachers daughter choose to sear off Fangs arm. This gory scene was probably pretty shocking for Chinese audiences back in the 60's. The blood squirts all over the place as our hero stumbles thru the snow with a severed limb.

One thing that makes this one so much different from the average Kung Fu flick is the fact that our main character is never seeking out revenge. In fact he fights his final battle to protect the ones who did him wrong. He even saves the life of the bitch who cut his arm off. Fang Kang has got to be one of the most forgiving and righteous characters in cinematic history. At times it almost gets annoying. You just want to see him take his stump of a sword and get some vengeance but that never happens.

One-Armed Swordsman would spawn a few sequels, remakes and ripoffs. It would also inspire films like The Cripple Masters and The Crippled Avengers. While the Kung Fu might not be overly amazing in this one the bloody mayhem and influential style makes it a must see for fans of Kung Fu films and the Samurai genre. Its a perfect blend!