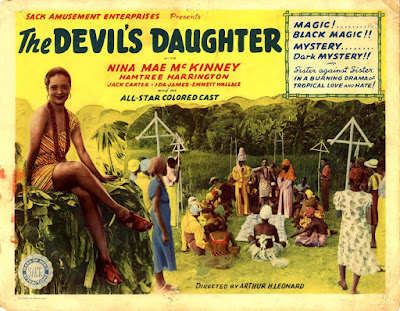 The Devil's Daughter is one of the worst movies I have seen in a very long time. Not exactly sure who this movie was marketed towards. This one sports a predominantly black cast and follows some jive talkin hep-cat from Harlem who is roaming around the plantation fields of Jamaica. He comes across a snooty upper class couple who get themselves into some trouble with the voodoo tribes.

The poster brags that it has an "All-Star colored cast" but I'm not so sure if any of these actors were stars. I can't really see this thing appealing to black audiences even in the 30's because it all comes off slightly racist. We have what seems like endless chit-chat about black magic and every couple of minutes we are tortured with another shitty song & dance number. Bongo drums play thru the majority of the film and after a while you just want to plug your ears but that wouldn't work very well either because the dialogue is so low and muffled with bad Jamaican accents.

The whole thing is a giant mess and it turns out to be more of a stamina test then anything else. Stay far away from this one. 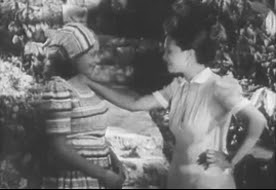