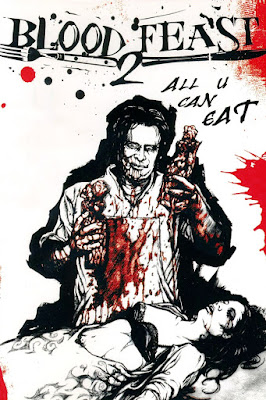 Way back in 1963 the great Herschell Gordon Lewis painted us a blood soaked picture with what he believed to be the first gore film ever made. That movie was of course Blood Feast. H.G. Lewis being a pioneer in exploitation cinema has touched upon just about every tasteless taboo that one could hope to see on the screen. However it was Blood Feast and his gore films that he is mostly remembered for today.

In the 80's a bunch of fan-boys put out a pretty fun sequel to Blood Feast which is widely known as Blood Diner rather then its alternate title Blood Feast 2. Jump forward to 2002 and H.G. Lewis himself makes his come back for the first time in 30 years with his official follow up to the cult classic Blood Feast. It went under the title of Blood Feast 2 : All You Can Eat. Its sad to say considering Lewis is amongst my all time favorite directors but Blood Diner is probably the better of the two sequels but none the less Herschell still delivers the blood and guts in the follow up to what he created all those years ago.

For those familiar with the original and the cannibalistic villain Fuad Ramses who met his fate at the end of the film, All You Can Eat brings us the great great grandson of the Egyptian cannibal and he goes by no other name then Fuad Ramses III. Fuad III looks kinda like John Travolta in Pulp Fiction with his long slicked back hair and button down shirts but instead of being a bad-ass gun-slinging mofo he is back to his grandfathers old tricks and hacking up young girls for a bloody feast which will be held in the name of Ishtar the goddess. Blood Feast 2 offers up plenty of bloodletting with graphic on screen murders. Make sure to pick up the uncut copy so you don't miss any of this gory mayhem. In the films most nasty moment we see Fuad dig a corkscrew deep into a woman's ear. The blood and carnage pours from the screaming woman's head in gory delight. We also get multiple throat slashings, a tongue is ripped out, eyes are plucked from the sockets, women are disemboweled, brains are pulled from achy-breaky skulls, hands are shoved into meat grinders, fingers are cut off and we are also treated to tons of vomit-fu from the character of detective Meyers who pukes at every crime scene.

All You Can Eat relies pretty heavily on comedy with typical bad Jim Carrey impersonations and over the top acting. However I can't help but love some of the characters in here. We have a fat detective named Loomis who eats excessively at every crime scene while his partner vomits, we get a bunch of hot chicks who strip nude for the camera and model their favorite underwear during a lingerie party and even John Waters shows up as a pervy child loving priest. If you look closely you can also spot Herschell's partner David F. Friedman.

By no means does this thing stand up to the original film in weirdness of shockingness but its still worth owning for H.G. Lewis fanatics. It has its moments and doesn't shy off on the blood but I still can't help but with Lewis took it a bit more serious instead of making what seems like one big joke and homage to a timeless trash film known as Blood Feast

Email ThisBlogThis!Share to TwitterShare to FacebookShare to Pinterest
Labels: Blood Feast 2 : All You Can Eat, Psychotic Killers & Madmen, Splatter Flicks