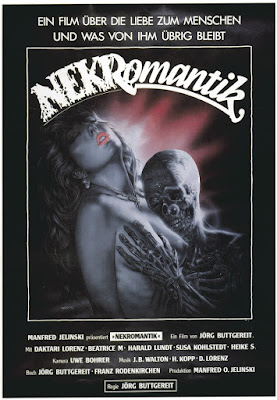 Nekromantik is completely disgusting, shocking, tasteless and out right disturbing. Naturally it is one of my all time favorites. 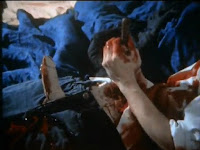 The first time I saw Nekromantik I was completely and totally disturbed. This film struck a nerve deep inside me that very few horror films have come close to. The strong impact it had on me has stuck with me all of these years and oddly enough it still shocks me to this day. It is kind of funny because within the film there is a conversation about desensitization and how it works. They talk about how teenagers who watch very brutal horror movies become desensitized after time. Well I watch horror movies on a regular basis for over 18 years now and I am still completely repulsed by this film. Nekromantik is a sort of cross between an art film and the nastiest of horror movies. It is extremely low budget and the lack of money totally shows. Still the depressing images, beautiful musical score and totally bizarre storyline makes Nekromantik a masterpiece in its own right.

This sick and twisted tale follows a young necrophiliac who has the perfect job of cleaning up road atrocities. Naturally the sicko takes home human remains to his equally demented girlfriend. Its not long before we watch the happy couple rolling around in bed with rotten corpses and living out all of their fantasies. When our main character looses his job and the couples corpse supply is cut off the woman takes off with the cadaver leaving our main character in a depressed state. The rest of the film is a downward spiral into madness as we watch him kill helpless animals and masturbate with the organs, kill hookers and have his way with the dead bodies and slaughter anyone who stands in his way. Things get worse and worse until our necrophile reaches a final enlightenment. What happens in the end has to be seen to be believed. They just don't get much sicker then this.

As one would probably guess, Nekromantik doesn't exactly have a happy ending. Or at least not in the Hollywood sense of happy endings. During the 75 minute runtime we see car crash victims, Human entrails are pulled from bodies, a cat is put in a garbage bag and smashed into walls repeatedly, we have a half-assed decapitation when a man has his face chopped in half with a shovel, a woman is stabbed in the guts with a switchblade, lots of corpse-fucking, close-ups on urination and in what might be the grossest scene in the movie we see a rabbits throat slit and then skinned in very gory detail. Nekromantik is not for everyone. It is for those who can handle the worst of the worst. The blend of art, beauty and violence makes for a very downbeat experience and I think its safe to say that many would not understand it. However if you like this sort of thing you don't get much better then Nekromantik.

Director Jörg Buttgeriet would go on to do a sequel to this. Nekromantik 2 is equally violent and disturbing with very brutal scenes of murder and necrophilia. It is also way more polished then the first film. Still I think the original packs a harder punch when it comes to the artistic flow and general feel of the film. Still everything in Jörg Buttgeriet's filmography is worth looking at.