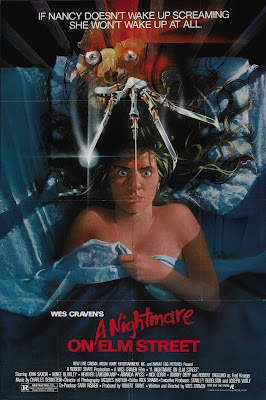 How does one good movie spawn so many shitty sequels? While I always did like this movie, I can't help but feel the shame of the rest of the franchise. The first Nightmare was original in story, creepy as hell and still managed to be good 80's gory fun. The whole slew of follow-ups and remakes are just plain comedies disguised as horror films and I can't stand any of them! 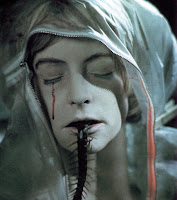 I just caught A Nightmare On Elm Street at a local theater on a double bill with the original Friday The 13th. It looked better then ever in its true 35mm format and now I am not so sure why I have passed this one up so many times on previous theatrical screenings.

I won't go into detail about the plot because everyone and their censorship loving mother has seen this movie but it is a strange take on the slasher genre. Freddy Kruger has become a household name as well known as Frankenstein or Dracula but it all started here in 1984 when the child murdering burn-victim first stepped onto the big screen. The idea of a psychopath who kills kids in their dreams has never been done with any kind of elaboration before this movie and anyone to come after it was blatantly ripping it off. The thing that makes this movie work so well is the odd blend between realistic psycho-murders and supernatural elements. In this sense A Nightmare On Elm Street seems perfectly balanced.

Oddly enough, what I like best about this movie is not the blood and gore. Its not even the character of Freddy. The truth is I find the character to be a bit on the silly side. I actually prefer the creepiness of the dream sequences. The scenes of body-bags being dragged across a empty hallway by an invisible source. Or the scene where the corpse spits up the giant centipede. Was Wes Craven watching some Hong Kong horror movies at the time he filmed this? I know the Chinese love their centipede-horror. Anyway it is these dark elements that make this movie work for me. Sure the scenes of teenage girls in their undies being slashed open and thrown about a room is always a nice touch but there is more going on in here.

I have never been the worlds biggest fan of Wes Craven. In fact I think this was probably the mans last good movie. Of course the success of Nightmare played a part in his obligations to please boring, mainstream movie goers and the glory days of exploitation trash like Last House On The Left were over. However fans of The Hills Have Eyes certainly would notice the similarities in Nightmare. The booby-trap revenge against Freddy brings back good old memories of a family who fights back against cannibalistic psychos. What was with Craven's obsession with booby-traps anyway?

Since everyone in the world has seen this movie... Instead of recommending it I will just say keep an eye out for a screening of this thing. It always pops up in big city theaters. Go and see it on the big screen, the way the gods intended it.