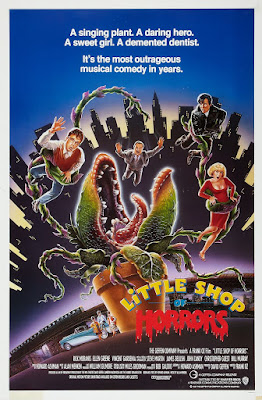 26 years after the release of Roger Corman's 1960 cult classic Little Shop Of Horrors comes this musical remake. Taken from the success of the off Broadway show this has to be one of the most bizarre remakes of all time.

While big Hollywood, family orientated productions is usually not my bag I have to admit that due to how weird it all is its a interesting watch. Rick Moranis plays Seymour, the nerdy clerk at a flower shop in "skid row". He comes across a strange plant which he believes is a sort of flytrap. Eventually Seymour will learn that the plant is in fact a blood thirsty meat-eater from outer space. How does he learn this you ask? The plant speaks of course. The foul mouthed jive talking plant even sings and thats just plain wacky. The plant promises Seymour success under one circumstance... Seymour must provide the plant with human victims and its not long before Seymour is chopping up a dentist with an axe and feeding his limbs to the killer plant.

Steve Martin plays a sadistic dentist who rides a motorcycle and comes complete with a leather jacket and enjoys beating his girlfriend, inhaling medical gas and of course torturing his patients with a variety of dental tools. In my personal favorite moment Bill Murray shows up as a sadomasochist who is looking to be tortured in Steve Martins dental chair. This is the kind of scene that is kinda weird to think of families watching together. While it is all done in typical Bill Murray fun the idea of it itself is a bit sick and twisted. I remember as a kid I could not understand what was going on. I just though Bill Murray was being silly again.

John Candy also pops up in here for a cameo and offers up a few laughs. I personally couldn't help but think about Planes, Trains And Automobiles which would come out a year later and star Steve Martin and John Candy. They both had supporting roles in Little Shop and of course would be the stars of the John Hughes film.

The budget on this thing was enormous and it shows. Estimated to be filmed for $25,000,000 the special effects are awesome. When putting it in comparison to Roger Corman's 27 thousand it seems all the more bizarre.

If you can stand musicals Little Shop Of Horrors is probably the best of the whole shitty bunch. Its light hearted family entertainment but its possibly weird enough for monster movie fanatics and horror fans. "Feed me Seymour"