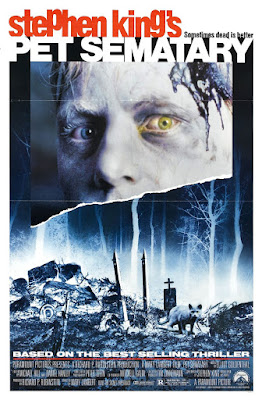 I first saw Pet Sematary as a young kid. I started watching it with my father but it was past my bed time and was forced to go to sleep. The next day I was eager to see the end of the film but my father didn't want to watch it again. He gave me the tape and told me to take it to the basement and finish it by myself. I was never so scared in my life. I ran upstairs terrified and couldn't finish the movie on my own. Pet Sematary has been a favorite of mine ever since.

The thing that amazes me so much about Pet Sematary is that it seems to have so much going against it but it still managed to be a great horror movie. Not to sound like a sexist pig but female directors usually do not offer up a great product when it comes to horror films but this one is jam packed with creepy images and is a very morbid vision from start to finish. Also we all know that it is rare when a Stephen King adaption is worth a shit. Yet again Pet Sematary goes against the odds and perhaps most importantly this thing comes from the bowels of 1989 which is a horrible time for horror movies in Hollywood. With all these odds stacked against it, I think it is safe to say that Pet Sematary is a phenomenon of its own.

There is a certain level of cheese in this one. You have the character of Pascow who walks around with a shattered skull and is trying to help the family from falling victim to the evil ways of an ancient Indian burial ground and some of the acting is way over the top but even the cheesy moments are not done horribly. The dark, morbid, depressing flow easily washes away most of the embarrassing moments. Fred (Herman Munster) Gwynne shows up in this one as a beer drinking old timer who knows the secrets of The Pet Sematary. He offers up so many great lines in this movie. His screen presence is larger then life and its pretty hard not to love his character. The film also offers up a disturbing scene where a little boy gets hit by a truck, a suicide by hanging, some scalpel-violence, zombie-fu and the incredibly creepy character of Zelda. This character is the reason that at eight years old I ran upstairs and couldn't finish the movie on my own. She still creeps me out to this day. Of course the film also comes complete with a Romones soundtrack and thats cool on its own. We also have what is possibly the worst line in cinematic history "Today is thanksgiving day for cats. But only if they came back from the dead" What does that even mean?

If I ever get stuck with a kid of my own I am going to be sure to have the little shit watch this one in the basement alone and continue family tradition. Keeping the spirit of Pet Sematary alive.

I recently saw this in the theater on a double bill with the great cult film Night Warning. The audience seemed to love the movies as much as I did and it got its well deserved applause. Pet Sematary is a timeless classic and it gets better with every viewing.