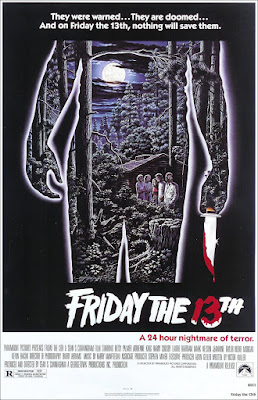 Friday The 13th is a timeless classic and Jason, the hockey mask wearing psycho has become as iconic as Santa Clause and Michael Jackson. Well it all started with this 1980 ground breaking slasher and it would spawn a whole franchise of sequels and remakes.

The plot is as simple as can be. A bunch of teenagers head to the woods to repair a old campground called Camp Crystal Lake while a unknown psychopath stalks in the shadows and kills them off one by one.

The killers face is not shown until the final reel of the film and I'm sure it was a shock to theater goers in 1980 and sorry to disappoint the young kiddies here {spoiler alert} but there is no hockey mask wearing Jason in this movie. In case you were born on mars or something and have never seen the original, it is a woman who is doing all these brutal killings and the woman is Jason's mother.

Betsy Palmer who just recently passed away did a great job as the deranged mother. We also have a very young Kevin Bacon who has a arrow shoved thru his neck in a pretty gruesome scene. Some of the other memorable moments involve a axe to the achy-breaky skull, a graphic throat slashing and a decapitation. Legendary makeup artist Tom Savini does the effects here and they all look great as usual. Oddly enough modern viewers are more likely to be disturbed by the scene where a real snake is chopped to bits with a big machete. Aside from the blood and mayhem Friday The 13th offers up some great characters. One in particular has a cult following of his own. He is of course crazy Ralph. Ralph kind of runs around scaring the teenagers and warning them that they are going to die. "You're all doomed!".

Recently I caught this in a theater as a double feature with Wes Cravens A Nightmare On Elm Street. Both films looked great on the big screen and there is of course no better film for Friday The 13th play with on a double bill. Both Nightmare and Friday would of course go on to be huge franchises and of course the odd connection is that both directors have previously worked together on the infamous Last House On The Left. Both Nightmare and Friday were not intended to have sequels but unlike the Freddy movies Friday The 13th would spawn good trashy entertainment in the years to follow with plenty of gory death scenes for 80's teenagers to get their rocks off too. A great musical score and lighting which goes from dark to blinding light help set the mood for this groundbreaking horror flick. It offers plenty of jump scares and is a staple in this brand of a horror.