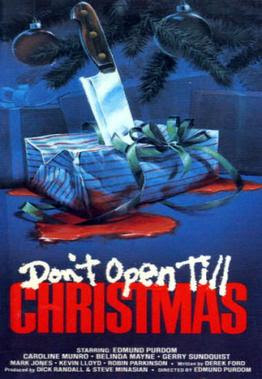 With the success of the infamous American slasher film Silent Night Deadly Night the British would release their very own Christmas slasher just months later.

Instead of a madman running around in Santa outfit slashing up teenage boys and girls like in the American classic, This one showcases a psycho killing anyone who wears a Santa outfit. Ah very unique right? I guess I can relate to this killer to a certain degree considering we both hate Christmas and just about everything it stands like. However unlike this mask wearing nut-bag I don't stalk the streets looking to put a blade into the guts of Santa Clause. I will hand it to whoever thought up some of these murder sequences. Each one is different from the last and it does make for an interesting slasher movie. In the most memorable scene the killer castrates a man in a Santa costume while he takes a piss at the urinal. The blood shoots into the pisser and the fat jolly bastard bleeds to death right there in a dirty public bathroom. Hows that for Christmas cheer?

Another Santa has his brains blown out the back of his head while another has a spear shoved thru his face. We have meat-cleavers to the achy-breaky skull, eyes are gouged out, another is burned alive in his car, plenty of stabbings and of course some prevy Sanat action.

I have never seen a good copy of this movie. Not even in the VHS days. It can usually be found on dollar-disc multi-packs but the prints are usually very dark and washed out, not mention they are probably cut. The fact that the film quality is so bad and I still enjoy this movie says something to me. Perhaps it is worth it to upgrade to the Mondo Macabro DVD for optimum Santa killing pleasure.

This one comes complete with some Brit-Tit and an incredibly sleazy scene that takes place in a sex-booth. Where a stripper watches the killer rip into yet another Santa Clause as the blood splats across the plate glass. Typical of Slasher films from this era, they try to hold back on the killers identity till the very end but it is of course a sort of generic and predictable type ending.

Still Don't Open Till Christmas is good slasher-fun with enough sleaze and gore to keep fans of the genre happy. I would like to see this on a double bill with Silent Night Deadly Night. Thats the Christmas spirit.