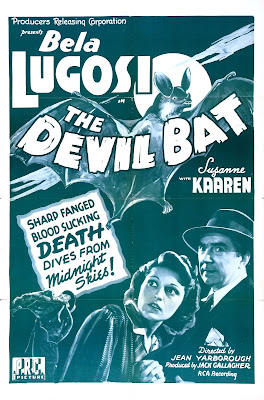 Bela Lugosi plays a pissed-off, bitter doctor who concocts an aftershave that makes his giant pet bats go crazy and attack whoever is wearing it. 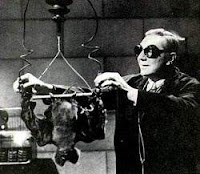 The film gets rather repetitive with the same thing happening over and over again. Lucky for us the films running time clocks in just over an hour at 68 minutes. Keeping it short and sweet and to the stupid point seems to be the best option here. If the film ran any longer it would be bound to put people to sleep.

As far as the entertainment goes, Ya have Bela Lugosi in big goofy goggles playing with his potions and bats, you get two dim witted reporters who are trying to figure the whole thing out and a bunch of cheesy scenes in which victims are attacked by the giant fake looking bat. Not only does the bat look fake but it squeals like a hawk before it attacks. This all happens while the bad actors try their hardest to look believable. Lugosi's accent is as thick as ever in this one and most of the time its pretty hard to understand him but this is nothing new to fans of the cult icon.

The Devil Bat is only worth looking at for lovers of truly bad cinema and Lugosi fanatics. All others would probably be better off skipping it all together.