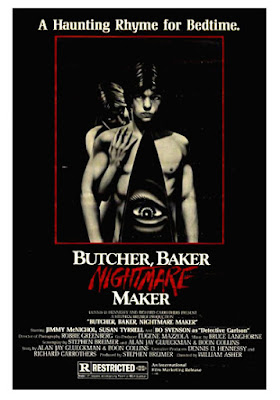 This movie has grown a unique cult following in my home town of shit-hole Long Island. Every year this film plays and the audience grows. It last played on a double bill with Pet Sematary which makes for a pretty strange double feature but then again Night Warning is a pretty strange movie. This is the third time I have seen this movie with a audience so I guess you can say I am a member of this Long Island cult following.

Susan Tyrrell (Forbidden Zone) plays Aunt Cheryl. This aging weirdo has quite a few problems. Her strange obsession with her teenage nephew is turning dangerous and its not long before she is drugging the teenage jock, smashing his girlfriends achy-breaky skull in with a meat tenderizer, plunging kitchen knives into the homosexual television repair man, slashing her elderly neighbors guts open with a machete and chopping police officers hands off. In other words Aunt Cheryl is bat-shit crazy and the question is how long has she been a psycho. By the end of the film all of the answers are laid out for us but it is the absurdity of the movie its self that brings people back to this movie over and over again. 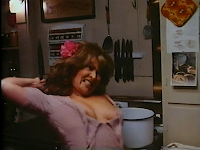 Night Warning also went under the title of Butcher, Baker, Nightmare Maker which is almost as odd as the film itself. While it is certainly high in entertainment there seems to be a few social messages thrown into the mix. I even heard this film played a gay & lesbian festival due to its heavy homophobic subtext that runs throughout the films entirety.

Bo Svenson from the Walking Tall movies plays detective Carlson, a gay hating fascist who is blinded by his hate. Instead of trying to solve the murders that have been taking place he spends most of his time fag-bashing and bullying the local gay men. Seeing this movie with an audience in 2015 is pretty amusing considering how up tight people are with any kind of bigotry. The anti-gay slurs fly and the bodies keep dropping.

Aside from the homosexual subtext Night Warning is full of surprises. While it starts off like a weird cross between a thriller and a drama it eventually shifts gears into what seems more like a slasher movie. Its sleazy, gritty and violent. Its safe to say that the biggest fan base of this movie is probably anyone who really digs 70's exploitation movies. Anyone who likes shocking titles with taboo subjects will probably enjoy this movie. Homosexuality, incest and of course murder. Its all here right in your face. Check it out for a good time with a knife wielding Susan Tyrrell.