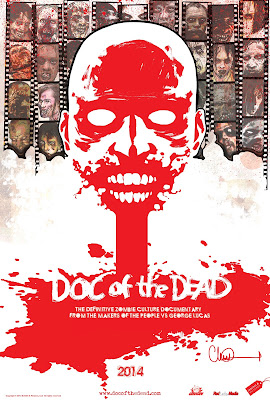 What a piece of shit this is! Doc Of The Dead is supposed to be an in depth documentary on zombie films and the zombie obsessed phenomena that has taken over America.

The lame-brains behind this crap-fest attempts to go back in history and look at the origins of the zombie film. Well they do go back and look at stuff like White Zombie and even a bit of the 50's stuff like Invisible Invaders then of course it brings us to the George A. Romero flesh eating zombies of modern day. What it fails to do is mention any of the rare cult films in the genre. No mention of people like Lucio Fulci or the Tombs Of The Blind Dead or Let Sleeping Corpses Lie. Instead it sticks with the oh so familiar Hollywood zombie films that the teens at the local mall probably have saved on their cellphones and the retarded zombie-loving youth who go on zombie-walks and do zombie car washes. God help us! As if this wasn't all bad enough Doc Of The Dead is jam packed with the worst music I have ever heard in my life. We get a bunch of shitty songs and really awful comedy segments with typical zombie film cliches. How about you show some cool scenes from the few good zombie films there are out there?

Personally I think the zombie genre as a whole is complete shit. Of course there are some great movies in the genre, like Romero's films and some of the splattery 80's stuff like Re-Animator but no other genre has ever spawned so much crap. Any dick-head with a camera chooses to make a zombie flick as their first feature. All they need is a cellphone and few equally retarded friends. Even the slasher genre has not spawned as much embarrassing shit.

The thing I found most interesting about this thing was that all of the old timers like Romero and Tom Savini are on the same page as me. They don't understand this obsession with zombies and these are the few guys who did it right. What is a zombie fan anyway? Is it someone who likes horror movies? Of course not! They are dumb teeny-boppers who discovered The Walking Dead on television and delved into some of the modern crap like Shaun Of The Dead or worse yet these crappy cgi infested zombie movies that they shit out every other day into our equally crappy multiplexes.

Wash off your zombie makeup, take that dumb bumper sticker off of your car and throw away your zombie survival guide. For anyone who are into the classic zombie films from the good ole days, don't waste your time with Doc Of The Dead. 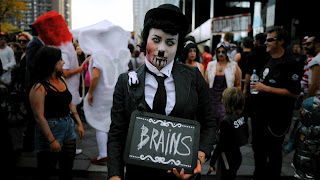 Email ThisBlogThis!Share to TwitterShare to FacebookShare to Pinterest
Labels: Doc Of The Dead, Documentary, Zombie Flicks