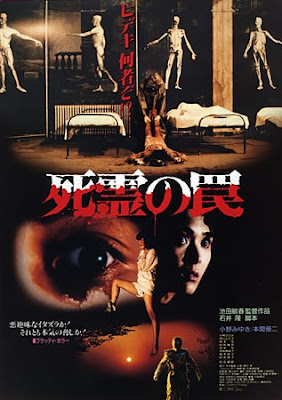 The first time I saw this movie I was up for well over a day. My over tired and over partied brain wasn't quite ready for what I was about to see. Already being a jaded horror fanatic I didn't think there was too much I haven't seen. Well I guess it was a perfect blend of tiredness and delusion because this movie scared the hell out of me. While I'm not to sure Evil Dead Trap would have the same affect on a well rested and normally functioning person, I wouldn't change my first experience for anything.

Looking at this movie now as a sober and responsible adult with a normal sleeping schedule the film still managed to be creepy and gross but maybe less scary.

Evil Dead Trap is about a late night television host who reaches out to her insomniac viewers and tells them to send in their personal home videos which she will air. Amongst the piles of boring shit she receives a VHS tape that showcases a young woman having her eye punctured by a psychopath with a kitchen knife. Blood and fluid pour from the screaming woman's eye before she is killed in graphic detail. The mailed in snuff film also comes complete with the location of the murder so the curious TV host gathers some friends and heads out to the abandoned building where the killing supposedly took place.

Once inside the creepy old building the characters are killed one by one in stalk and slash fashion. The entire movie is soaked in crimson and each death scene is totally different from the last. The masked killers identity doesn't become known to the very end but there seems to be something super natural about this place. Many of these murders seem impossible for one man to do on his own and it all serves to keep the viewer scratching their head in confusion.

The title of this movie is bound to annoy Sam Raimi fanatics but at least the name isn't completely random. This one plays like a cross between Evil Dead and Suspiria. We get the Evil Dead cinematography crossed with the influence of Dario Argento's stylish lighting. Even the musical score seems like something that would come form an Argento flick. When its all said and done it probably has more in common with Argento then Raimi considering it is almost a Japanese version of a Giallo. 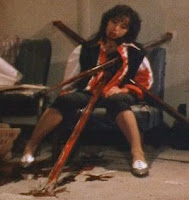 The only problem I have with this movie at all is some of the supernatural elements. It ends up going into a bizarre world where nothing makes much sense. When it is all eventually explained it is to silly and strange to be taken seriously at all.

Still Evil Dead Trap is gory and sick enough to please the average gore-hound. Some of the more memorable scenes include eyeball stabbing, a body swinging from a meat-hook, a woman has multiple poles shoved thru her bloody body, heads are split open by sharp booby traps, a woman is raped and then strangled with a wire and a man is set on fire and crumbles to ash.
This one works for fans of slasher movies, Italian Giallo's, monster movies and supernatural ghost flicks.