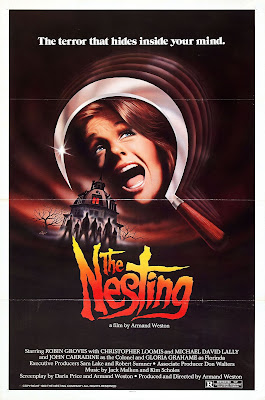 The Nesting starts off very strong with a heart-pounding opening sequence which introduces us to Lauren who is suffering from agoraphobia. Lauren is on the verge of a complete breakdown as she suffers from the ultimate anxiety. She stumbles through the street and a total collapse seems just around the corner. The camera angles make the outside world look very menacing and the cinematography is very affective. The camera work in this opening scene reminded me more of something like Polanski's Repulsion rather then that of a 70's porno director but those familiar with Armand Weston's work, especially Defiance Of Good should not be to surprised.

After Lauren's breakdown she decides to take a little vacation. She leaves city life behind for an old rundown mansion in the suburbs and when I say rundown I mean it has been abandon for many years and John Carradine is the landlord. Don't get me wrong if I could have John Carradine as a landlord I would probably jump on it as well but someone like Lauren who is obviously not doing so well should have taken Mr. Carradine as a bad omen. This can only turn out bad. Naturally the house is haunted and very strange accidents seem to be happening. This part of the film is a little slow and tends to bore a bit but it eventually will pick up for some grizzly murders. The most memorable scene shows a man having a sickle smashed into his achy-breaky skull. We are also treated to a brothel massacre when we witness a whole house of whores being gun downed one by one in a scene that reminded me of Rolling Thunder.

The Nesting can get slow at times but manages to hold your attention through violence and scenes of bad taste. It comes complete with a twist ending which is nice and it has a bit of T&A to get you through the rough spots. Oh and watch for the crazy stunt where a man throws himself down the stairs. Ouch! One of the better ghosty flicks from this time. 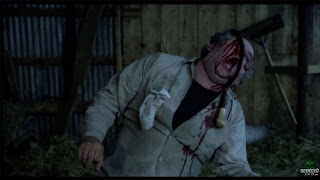 Email ThisBlogThis!Share to TwitterShare to FacebookShare to Pinterest
Labels: Hauntings And Ghosts, Massacre Mansion, Nesting (The)