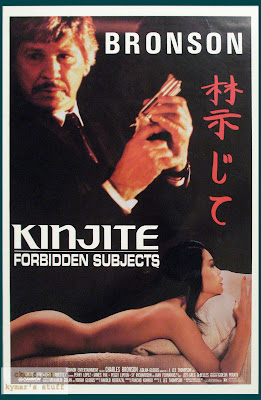 Kinjite is  apparently a word that is used in Japan to describe a taboo subject such as sexual abuse, child molesters and prostitutes. Kinjite is a Forbidden Subject in Japanese culture but luckily for us Americans it is not forbidden to watch.

Charles Bronson plays Lieutenant Crowe, a police officer who is on a pretty rough assignment and the job just might be getting to him. A typical day for Lieutenant Crowe involves tracking down pimps and making them eat their $25,000 wrist watch and sticking dildos up child molesters assholes but we will get back to all that good stuff in a bit. Kinjite was directed by J. Lee Thompson (Ten To Midnight, Happy Birthday To Me) and the director offers up all the Forbidden Subjects that we can stand. In this movie Charlie Bronson is tracking down some pimps who like to abduct young (very young) girls, molest them and put them out on the streets addicted to smack for a profit. After Bronson's own daughter is groped on a bus by a perverted Japanese man, he might not be the best candidate to help find a young pre teen Asian girl who has been corrupted by the dirt-bag pimps.

Kinjite is sleazy and disturbing at the same time. The audience can not help but feel uncomfortable with the contents of the depraved subject matter. We have plenty of naked female flesh on display but considering what is happening to these girls it is anything but attractive. This one depends more on the twisted story then it does on the shoot-em-up more typical Bronson stuff. Of course we get all the expected revenge but it is the sickness within the plot that really separates Kinjite from the more typical Death Wish type stuff.

As I mentioned earlier Charlie Bronson has his own way of dealing with the scum on the streets. In the most memorable scene he forces a kiddie-touching pimp to swallow his own watch. Then Bronson blows his car up as a final fuck-you. In another scene he sticks a rubber dick up a mans ass. Now that's justice! He also throws a pimp off of a balcony, leaving a fine looking corpse with a shattered achy-breaky skull. The film also offers up quite a bit of racism from our vengeful hero Bronson. We have young Asian prostitutes, child junkies and multiple explosions. On a down note Kinjite comes complete with one of the worst musical scores I have ever been forced to sit through. The soundtrack is painfully bad but it is a small price to pay for the overall experience of Kinjite.

Although very different in the plot, I would say the best audience for this movie, aside from Charlie Bronson obsessed lunatics would be fans of J. Lee Thompson's Ten To Midnight. Its sick and twisted but justice is served. This one really doesn't work for die hard action fans. Luckily for me, I do not fit into that catagory. 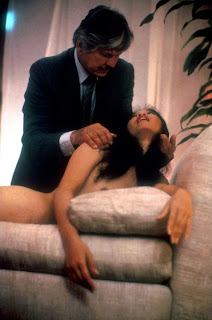