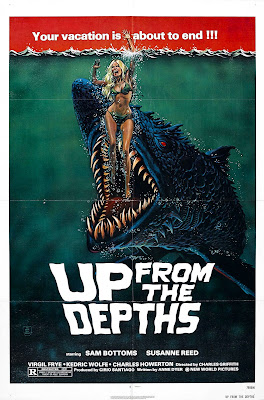 Roger Corman sure can beat the hell out of a dead horse. Here he goes again with another Jaws ripoff. This one just doesn't come close to some of the other attempts like Piranha. 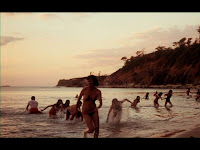 At a Hawaiian tourist resort a giant sea-monster terrorizes the people and has them for lunch. The monster sort of looks like a shark (I guess) but is supposed to be some prehistoric killer fish that modern man has never known. Fans of Piranha or Humanoids From The Deep will most likely be greatly disappointed. I guess Up From The Depths serves as a slightly mind numbing time waster but there are just so many better choices for Jaws ripoffs. I consider this one to be a slightly more polished version of Monstroid which would come out one year after this one and is just awful.

Sam Bottoms who I remember best as the surfer on acid in Apocalypse Now shows up here as a suedo pirate. I suppose in some ways he is a pirate because he is a pretty good thief and he spends all of his time on a boat. So I guess its kind of cool to see him in a B-grade movie from the same year that he did the greatest Vietnam flick of all time and it is also hilarious when his name comes up on the screen. Sam Bottoms is plastered across the wiggling bottoms of Hawaiian babes.

Up From The Depths does offer up a bit of tit when a naked model goes scuba diving in the nude. Of course Lucio Fulci's Zombie would use this in a much more affective way. There is a bit of blood and of course the stupid sea-monster but as a whole I would say skip this one and just watch Humanoids From The Deep again. 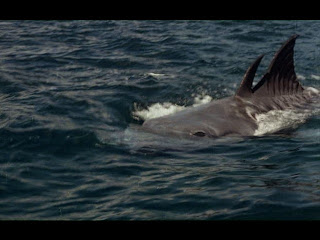 Email ThisBlogThis!Share to TwitterShare to FacebookShare to Pinterest
Labels: Jurassic Jaws, Monster Movies, Up From The Depths