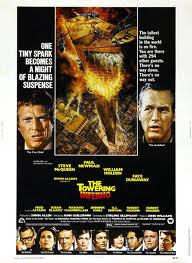 So last week hurricane Sandy or as I like to call it Frankenstorm was on its way to Long Island. It was two days before Halloween and according to the news this was going to be a bad one. So as I waited for the storm I decided to watch a disaster movie. I chose The Towering Inferno.

The storm raged outside of my suburban home as the fire spread across my screen. I was interrupted by the loudest fucking crash I have ever heard. My house shook and all the power went out just as the movie was getting good. A tree came down and pulled the electrical lines from my house and my neighbors. Sparks flew through the air and my neighbors house was catching fire. Naturally I waited till the winds calmed down and got my generator running so I could see the rest of the movie. I don't think I will ever forget The Towering Inferno.

This one was produced by Irwin Allen the same man responsible for Swarm and the best disaster film of all time The Poseidon Adventure. It is an entertaining movie but I personally couldn't help but compare it to The Poseidon Adventure. In that sense The Towering Inferno just doesn't compete. There just isn't that much that you can do with fire. After a while the fire gets a little bit tedious. Buildings on fire, furniture on fire, people on fire. I also felt that the characters were not all that interesting and its a shame because the film has a great cast. Steve Mcqueen (The Blob) plays the bad-ass fire chief. Paul Newman (The Hustler) plays a bad-ass good-guy, Faye Dunnaway (Bonnie And Clyde) is always nice to look at. We also get William Holden (The Wild Bunch) and O.J. Simpson which helps add a bit of camp value to the film. Still the characters are not interesting. Luckily for us it picks up towards the end but the film is on the long side. It clocks in at 165 minutes. We do get all the crazy burn victims and everything that can possibly go wrong does but this one definitely would have worked better if it was cut down to a 90 minute movie.

This one will help you get through the devastation of a hurricane but for a better time just stick with The Poseidon Adventure.