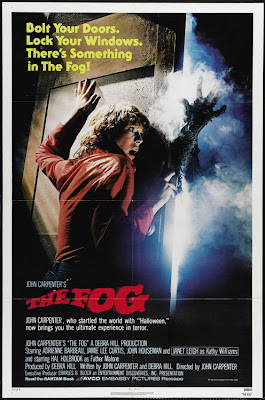 I have no idea how many times I have seen this classic. I first caught it on television as a kid. Then on VHS, then on DVD. Its one of those movies that everyone owns, so if you go to a friends house who has a slim movie collection you might be stuck putting this one on again. I was even lucky enough to see it on the big screen some time back. All these years later The Fog still works. Its a classic! Its The Fog!

Remember when John Carpenter was still cool? Halloween, Assault On Precinct 13. Even Carpenter's 1978 made for television movie Someones Watching Me was good for a scare. Well The Fog wasn't exactly the last good film in the directors career but it is closing in on the end. After The Fog John Carpenter would go on to do Escape From New York, The Thing and then Christine in 1983. From 83 on his films would get worse and worse but this just seems to be the trend for great American horror directors from the 70's. Wes Craven, George A. Romero and many others would all go the same way.

The Fog on the other hand continues to impress me to this day. It is genuinely creepy and holds a very good story. Yet it is not overly graphic. Almost all of the violence takes place in a thick fog which leaves a lot to the imagination. Usually this is a disappointment but it works perfectly in this one.

The Fog is a ghost story. It tells of a group of men who were betrayed, robbed and slaughtered by the new settlers of Antonio Bay. 100 years later the victims come back to Antonio Bay. They roll in with a thick fog and take revenge on the town. Like most super natural movies from this time many of the things that happen are confusing and don't make a whole lot of sense. Things catch fire for no explained reason. Clocks stop and electronic devices go ape shit. For me this is the only down side to the movie. I was never able to just say okay its a ghost movie, it doesn't have to make sense. I always want an answer. This is just a small flaw in a great movie. It doesn't hurt the film much.

The Fog comes complete with a great cast. We have Adrienne Barbeau who I remember best as Billy from Creepshow. "Just call me Billy. Everybody does." Barbeau plays the host of a radio station which is stationed from an old light house where she can warn the people of Antonio Bay which way The Fog is rolling. Hal Holbrook (Rituals, Creepshow) plays a priest who must answer to the vengeful walking dead for the sins of his ancestors. Janet Leigh (Psycho, Touch Of Evil) shows up along side her daughter Jamie Lee Curtis (Halloween) and the cult icon Tom Atkins (Night Of The Creeps, Halloween III : Season Of The Witch) shows up as the drunken lover-boy of Jamie Lee. You also might recognize some other John Carpenter familiars such as Nancy Kyes who's character goes by the name of cough... cough... Sandy Loomis.

A strong plot, memorable characters and zombie-ghost-pirates make The Fog the classic that it is. We have sharp objects shoved through eyeballs, swords through torsos a dead priest and plenty more. Due to the lack of visual graphic violence and nudity I always recommend The Fog as a great horror movie for parents to show to their pre-teen children who are interested in horror movies. Why this movie got a {R} rating, I am not really sure. I feel that it should have been {PG-13}. I have not seen the 2005 remake and I don't want to. The Fog is a childhood favorite and we all know that the remakes of the 2000's are awful.

"I don't know what happened to Antonio Bay tonight. Something came out of the fog and tried to destroy us. In one moment, it vanished. But if this has been anything but a nightmare, and if we don't wake up to find ourselves safe in our beds, it could come again. To the ships at sea who can hear my voice, look across the water, into the darkness. Look for the fog." 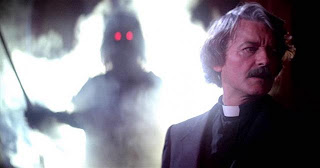 Email ThisBlogThis!Share to TwitterShare to FacebookShare to Pinterest
Labels: Fog (The), Hauntings And Ghosts, Zombie Flicks