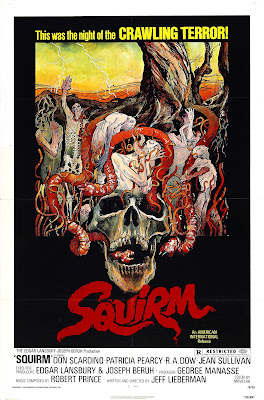 Squirm has everything in the world going for it. First off its a 70's movie. Secondly its a Jeff Lieberman movie. Plus it is a nature gone wrong flick and worms go ape-shit crazy and eat people. What more could you ask for?

Squirm is good gory camp at its finest. Some would put the film down due to its low budget. Others because of its bad acting and most would probably deem it stupid and the film is all of the above and that's why we love it, right? Squirm is the first full length feature film from Jeff Lieberman (Blue Sunshine, Just Before Dawn) and for those familiar with Lieberman's early work it offers all of the goods and doesn't hold many punches.

A small town is hit by a devastating storm which leaves the hillbilly towns folk without electricity. Little do they know that instead of being sent to their homes the electricity is running straight through the damp ground from a power line which was knocked down in the storm and thanks to Willie who owns a worm farm we learn that electric brings worms to the earths surface. Up from the soil millions of worms will emerge to make humans their meal. Awesome!

In one of the most memorable and ridiculous moments Roger a pervy dim witted hick has his face half eaten by worms. Instead of fighting for his face he attacks a man who he is jealous of and he delivers the brilliant line "Now your gonna have the worm face". Try to sit through this scene without laughing and you might self implode. Roger continues his wrath of vengeance up until his dying breath all the while being eaten alive by worms. Some of the other squirmy treats involve a man who has his guts eaten by the slimy creatures, a dead cop, a dead waitress, a dead mother, disappearing skeletons and a two story house which is filled to the brim with worms.

Unfortunately the cast members are all pretty ugly including the leading lady who takes a bath with some of the critters but the sister character really takes the cake. She is supposed to be some kind of a dope smoking, hippie wanna-be when it is obvious that she is nothing more then some dumb redneck and I wouldn't be surprised if she was a product of incest. The amazingly ugly cast just heightens the viewing pleasure of Squirm. If the worms don't make you Squirm maybe the females will.

Most Squirm fans would probably agree that Squirm would go great as a double bill  with the 1980's splatterific classic Slugs and it certainly would but the film would also go great with William Girdler's nature gone wrong flick Grizzly which was released the same year.

There is something about the films of Jeff Lieberman that always remind me of William Girdler. I was never able to exactly place my finger on it but there is something about the pace and mood that flows through both of the directors films which forces me to link the two together. Both directors have never really gained the deserved recognition and are remembered by most as b-movie directors who make wacky cult films. Maybe I am just crazy but for me there is some kind of genius to these films.

Get some friends together and run this one with Grizzly or Slugs if you have no imagination. Or better yet do a triple feature. Now that is a night worth remembering. 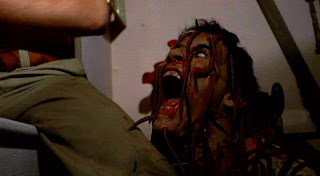