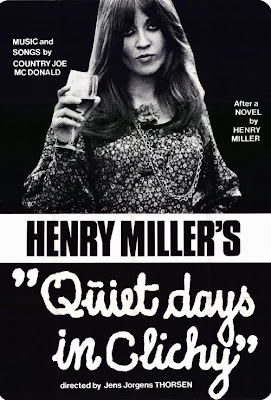 I have to admit this movie makes me feel a little bit like a fake. Personally not being much of a reader I have never read any of Henry Miller's novels. While I certainly know who Henry Miller is I have to admit that I am more familiar with his image and interviews which can all be found on the Internet then his actual writings. Yet Quiet Days In Clichy is one of my all time favorite Sexploitation movies.

This Danish film offers a very minimal plot but stands strong as high art in trash cinema. This overly sleazy sexploit follows two piss-poor writers Joey and Carl who indulge in the finer things in life such as sex and binge drinking. They make it a point to sleep with as many women as possible and morals come secondary to their sexual decadence. The two men find themselves in a bit of trouble when they find a 14 year old girl aimlessly walking the streets. They become aware that the girl is a bit slow in the head to say the least and they also are aware of her age but this doesn't stop Joey and Carl from exploiting her youthful body in every way possible. She becomes the men's personal sex toy and they await punishment. "All her brains are in her cunt" 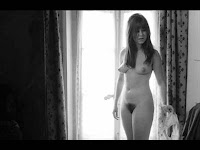 The 14 year old retard only eats up a small part of the runtime and there are plenty of other women who will bare it all in Quiet Days In Clichy. The film is loaded to the brim with naked female flesh and yes there are a couple of swinging dicks for added trash points but there is more to this film then sex sex sex. There is almost a poetry that flows through the film. A interesting and unique philosophical message. Yes its perverse and many would consider it depraved but there are moments of monologue that really punctuate the film and bring it to another level making Quiet Days In Clichy something a bit more then your average Doris Wishman sleaze-o-rama. "Better venereal disease than a moribund peace and quiet." The film has this beautiful nihilistic feel to it. Joey and Carl live by their instincts and the consequences and repercussion do not really enter the men's minds. That is at least until it is to late.

Another thing that makes Quiet Days stand out so much is how the story is told. Yes there are long moments of monologue but for large portions of the film nobody is speaking and I am not just talking about the sex scenes. Plus the film is not entirely in English. I would say only about half of the film is spoken in English but this doesn't really keep the viewer in the dark because texts sprawl across the screen explaining what is happening. Yes I said texts not subtitles. Almost as if the characters should have bubbles coming from their heads explaining what they are thinking, like a comic book. "Those were the days when the air was filled with cunt"

In one of my favorite scenes we see Joey going to sleep hungry. He has no cash because he gave it all to a hooker "The woman he loves". We watch him toss and turn as garage rock blares on the soundtrack and images of food spew across the screen. He wakes up in a frenzy, suffering from starvation, he roams the city streets looking for a hand out. He finds nothing and resorts to eating out of the garbage. He washes the garbage down his throat with some wine and goes back to sleep with a satisfied smile on his face. This all of course being a metaphor for his lifestyle and the trashy women in his life which keep him satisfied. In another scene we see Joey eat bread from a toilet bowl. Some of the other trashy delights that this film has to offer is a bathtub orgy which reminded me a bit of Denis Hopper's American Dreamer, sex scenes play like rape scenes and an amazing soundtrack by Country Joe. You have to hear this theme song to believe it. Its dirty!

Quiet Days In Clichy is the perfect experience for anyone who can dig a little bit of art with their sexploitation movies. Even for those like myself who are not familiar with writings Henry Miller. 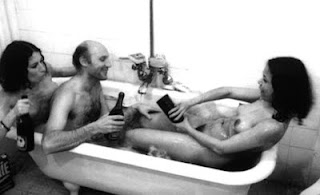 Email ThisBlogThis!Share to TwitterShare to FacebookShare to Pinterest
Labels: Arthouse, Not So Quiet Days, Quiet Days In Clichy, Sexploitation