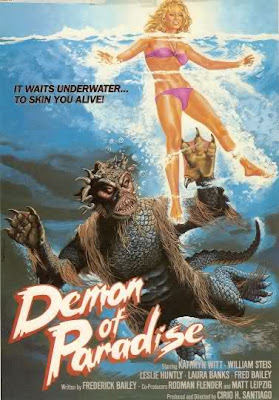 I had some high hopes for this one. Director Cirio H. Santiago has a whole slew of classic exploitation titles to his name including the blaxploitation classic TNT Jackson. Not to mention it was produced by Roger Corman. From what I have read, Demon Of Paradise is yet another attempt at Piranha success or a Jaws ripoff if you will.

Well this ain't Piranha. Demon Of Paradise is yet another victim of the terrible 80's where comedy and goofiness takes the place of any real substance the film might have had.

We have a bunch of morons who nobody would ever give a shit about being knocked off by a giant lizard like monster. The monster looks silly enough to have entertained the average Creature From The Black Lagoon fan but everything else about the movie is just wretched. From the acting to the dubbing. This piece of garbage should be blown to bits with the dynamite that woke our lizard-man up.

There really isn't anything here that is worth talking about. One gore scene and a few girls running around in bikinis is not enough to save Demon Of Paradise from being returned to the used bin at the local music and dvd store. For a much better time with under water sea monsters from the 80's I would say check out Humanoids From The Deep. That one is good trashy fun that never gets old. Or you could always just stick with the 70's classic piranha but if you are like me you will probably not take this advice. Surly you will find the next awful Jaws ripoff and live to give another bad review.

Skip this movie. Nothing happens through most of the running time and when it finally does it is nothing more then silly 80's antics. This one is just bad. 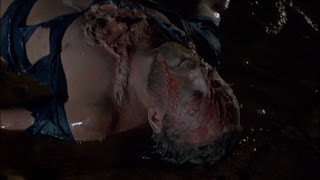