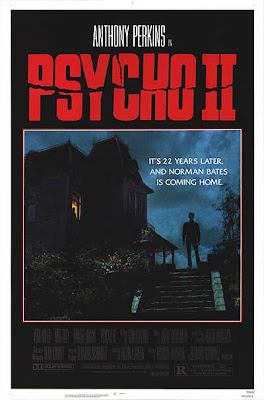 22 years after the Bates Motel massacre Norman Bates is released from the mental hospital. He is set up with a job at a local restaurant where he befriends Mary played by Meg Tilly. The only problem is that Mary's last name is Loomis which means she is a relative of the woman that Norman slashed up in the shower all those years back.

When he invites Mary to live with him it becomes a little to much stress on ole Norman. Lets just say that Norman starts to not feel so well again and people start getting knocked off one by one in true slasher fashion.

Psycho is one of those timeless horror movies where it seems pointless to do a remake or a sequel. Obviously Psycho 2 can't compete with Alfred Hitchcock's classic as far as style and originality goes but I generally like this follow up. In fact it is the only sequel or remake in the series that is worth watching at all and it is fun for what it is.

I feel that the film makers went in exactly the right direction with this one. If you can't out do the original just make it slightly more sleazy. Add in more gruesome murder and a bit of tit and we are on the right track.

Norman Bates still enjoys watching the ladies shower and luckily for us Meg Tilly offers up a quick nudie scene. Then we have a couple of horny teenagers who sneak into the old Bates house to smoke some dope and have sex but that ends pretty quickly at the end of a kitchen knife. My personal favorite character is Mr. Toomey a sleazoid who has been running the Bates Motel while Normal was locked up. When Norman fires the scummy motel manager, Toomey decides he is going to hurt Norman physically "Go ahead Psycho! Pick up the knife". Well Toomey ends up with a kitchen knife stuck through his face and is found later at the bottom of the swamp where Norman is oh so famous for dumping bodies and victims cars. 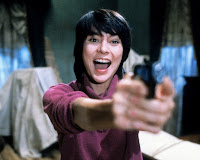 Then in the films most gory moment a woman has a knife shoved into her mouth which comes out by the back of her neck. Another man is stabbed in the guts and as he falls down the stairs the blade is pushed further and further into his body, An old woman is hit over the achy-breaky skull with a shovel and Norman Bates gets cut up pretty badly himself this time around.

The thing that makes this movie so fun, aside from the increase in violence is the relationship between Norman Bates and Mary Loomis. I wont spoil the ending but it does come with a little twist but most will probably see it coming.

Keep an open mind and don't expect anything spectacular and you might enjoy this one.